Why Cougar? Why not bunny, or truffle? Well, as I'm sure you would expect, there's a history to this.

Turns out, John Mellencamp was met with an ultimatum by Tony DeFries. Change your name and release your first album for MCA, or hit the road. You're a twenty-five year old nobody, with dreams and ambitions of becoming a rock star. What are you going to do? Nice to meet you Johnny Cougar!

Turns out, DeFries wasn't correct, and after a flopped first album, a shelved second album and egg on his face, Mellencamp shortened Johnny to John, kept the Cougar, and though it wasn't overnight, went on to make a little history in the world of music for himself.

John Cougar Mellencamp is yet another one of those artists who I have compiled a stack of albums for, eleven out of of twenty-four, but have yet to really dig into. He's one of those people who I said I wanted to broaden my horizons on, but then after buying the albums kind of just let them sit there.

Let me change that, starting with his 1983 entry, Uh-Huh. I selected this one for a couple reasons. 1) Because it was his first album to include the name "Mellencamp" in - all priors being just John Cougar. 2) Track number three - The Authority Song. One of my all time favorites from him. 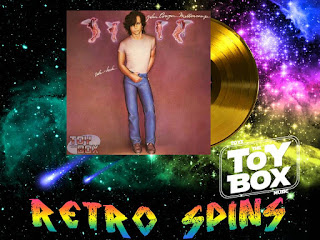 The first track took me by surprise because while it should have dawned on me, it didn't, that John Mellencamp sang Crumblin' Down. While it's not one of my all time favorites, obviously since I would have known who sang it, it was nice to be reacquainted with this track and to have it in my music collection.

The unexpected didn't stop there as the album's 2nd track began playing. Pink Houses isn't a title I would have guess in a million years, but the song was all too familiar. I would have thought if anything, it would have been titled, "Ain't That America." Either way, it was another pleasant surprise.

What else have I been missing in my life from John Cougar Mellencamp?

The Authority Song, which also happens to be track three was by far the best song on the album. However, nothing really caught my attention, with the exception of how bad Jackie-O was, until track six - Play Guitar. Lyrically, I didn't pay attention to the song. In fact, I all but tuned it out until that killer guitar solo kicked in. This also kept my attention long enough that the following track, Serious Business, also had me nodding my head to the music.

It was when Lovin' Mother Fo Ya that it dawned on me, had it existed,  this album most likely would have had a parental advisory sticker on it. Between the cursing and content, the PMRC would have had a field day with Uh-Huh back in 1983.

Overall, it's a pretty okay album. It doesn't leave me chomping at the bit to hear more from John Cougar Mellencamp, but it was a decent listening session.

Click "HERE" to go back to the home page. For more posts related to this one, please click the labels below.
Posted by The Toy Box on January 26, 2021
Email ThisBlogThis!Share to TwitterShare to FacebookShare to Pinterest
Labels: 1983, 80's Album Review, 80's Music, 80's Music Review, John Cougar Mellencamp, John Mellencamp, Music of the 80's, Retro Spins