The year was 1973. The day, February 10th. The event, Eurovision. ABBA had been invited to represent Sweden, and after months of work between founding members Benny Andersson, Björn Ulvaeu and their manager, Stig Anderson, an eventual re-write in English by Neil Sedaka and Phil Cody, the group recorded and submitted one of their soon to be most popular songs, Ring Ring. The soon to be international stars, with singing duo Agnetha Fältskog and Anni-Frid "Frida" Lyngstad, ABBA were poised to be the champions.

They were not. The group came in third, officially leaving them out of the Eurovision contest. However, 1974 was just around the corner, and with it, an all new contest. This time, ABBA came back even stronger, unleashing the song, Waterloo. With it came the first place prize of the contest and a career which launched into orbit!

ABBA were formed in 1972 by Benny Andersson, Björn Ulvaeu, Agnetha Fältskog and Anni-Frid "Frida" Lyngstad, with the name of the group being an acronym for the first name of each member. When they first began, it was well known that the quartet were actually two couples, Fältskog and Ulvaeus, and Lyngstad and Andersson. However, as their careers proceeded, and their lives became more and more public, this weight would unfortunately contribute greatly to both couples eventual divorces. If there's a bright side, this fortunately didn't impact the band as a whole, who continued to perform together through their final album in 1981. Though rumors continue to fly around that an all new album is in the works, to date, there's been no sign of this.

Despite their breakup, ABBA remains one of the most influential and successful groups of all time. Over a decade since disbanding, their 1992 Gold: Greatest Hits compilation album remains one of their highest selling releases of all time. Even today, fans long for the group to conduct a reunion tour. Something I myself would get tickets for, if it ever happened. 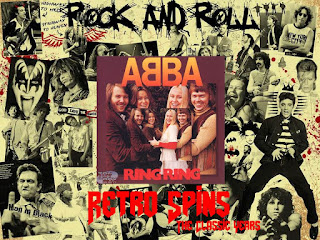 Today's Retro Spin takes us to the 1973 debut album, Ring Ring, an album I'm somewhat familiar with. I've definitely heard it before, but since it was so long ago, I had forgotten many of the tracks which didn't get shuffled off to the numerous greatest hits over the years. Most notable from this album are the songs Ring Ring, People Need Love, Love Isn't Easy (But It Sure Is Hard Enough) and Nina, Pretty Ballerina.

As for the rest of the album, it's okay. However, it definitely doesn't pack the punch that their hits do. What it does offer is a glimpse at the foundation that ABBA was about to build upon. They show two song writers that had a vision, and were overlaying tracks in a way that would create their own unique sound. All of this was backed with a due of female singers who contrasted each other greatly, regardless of who was singing lead, sometimes backing Björn who takes the lead on a handful of songs.

Each figure of ABBA brought with them their own talents, which felt unstoppable when combined. Hearing Ring Ring, the album, serves only to excite me all the more to jump into their second, third and beyond records.