Here's an interesting one we've come across; Adventures in Odyssey. Never heard of it? Not surprised. It's not your typical action figure based on your typical 22 minute afternoon or Saturday morning cartoon.

Adventures in Odyssey actually began a radio drama presented by the Christian group, Focus on the Family in 1987 which to date features over 800 episodes (or serials). The shows were developed for inclusion in the group's ministry as an alternative to Saturday morning cartoons. What set this show apart from most Christian themed programs was that it was not designed to be "preachy", but rather "entertaining" (as annotated from a quote by co-creator Phil Lollar).

The radio shows grew so popular that to date they air on over 6000 radio stations around the world in various languages. As of 1992 they had been released on cassette and CD collections, selling over a million copies of cassettes alone. Additionally, Chik-Fil-A has had several Adventures in Odyssey themed kids meals at their fast food locations. The point of all of this - Despite being unknown to many, this is no small license.

In 1991, a video spin-off of the radio drama was created as an animated alternative for children. This is what the iterations of figures below were based on. With a $400,000.00 budget for each episode you can certainly expect to find quality cartoons here (should you choose to hunt them down).

Unfortunately to date the series has been unsuccessful in finding a television station to air it, so the only option for viewing is the original VHS tapes or recently released DVD's which feature all seventeen episodes. You can also find clips on Youtube. It's honestly not a bad show.

But, what about those figures? 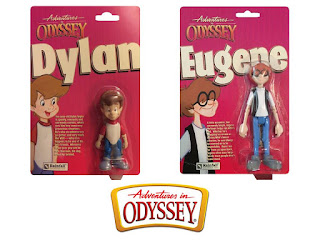 They're honestly not terrible in terms of sculpt. They certainly match their on screen counterparts. Unfortunately what makes them lackluster is their lack of any accessories. What are kids supposed to do with them once they're out of the package?

Without any accouterments, all you really have here is a handful of figures who do nothing short of standing around. I.E. There's no interaction going on here - Which makes for a rather bland and boring action figure line. We know they're going for the whole non violent theme here, but give them something.

Alright, alright - We don't want to spend this post bashing the line. This is certainly not our intent. As we said, in terms of sculpt these aren't bad figures when compared to their on screen counterparts. 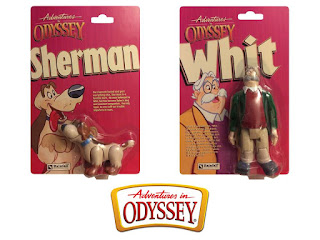 Under Rainfall Educational Toys the line featured four figures; Dylan, Eugene, Sherman and Whit. When the license was transferred to Chariot Victor Publishing (as noted below), all four figures were re-released on those cards, and this time around also featured Connie (1999).

We do have to admit that the bright pink package definitely draws in your eye, and can even admit that as kids if we saw them we would be interested enough to take a closer look. 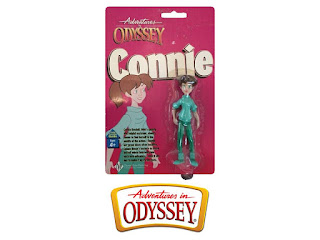 You're going to want to sit down for this one...

If these figures are something that interests you, you're going to first and foremost be very patient. These aren't all that common. Next, if you find a full set, be ready to spend upwards of $200.00 for them carded. Whoa! TWO-HUNDRED DOLLARS!

Click "HERE" to go back to the home page. For more posts related to this one, please click the labels below.
Posted by The Toy Box on December 04, 2017
Email ThisBlogThis!Share to TwitterShare to FacebookShare to Pinterest
Labels: 1990's, Adventures in Odyssey, Chariot Victor Publishing, Rainfall Education Toys