Horatio Q. Crunch's cereal was created based on a survey of children who said they disliked soggy cereal. In response, Quaker (thus the Q in Cap'n's name) gave kids a cereal so sog resistant that it actually cuts the roof of your mouth - Don't lie. You know it does that to you too.

Since his inception, Cap'n Crunch has had twenty-five (or so) different kinds of cereal spin offs - Some more successful than others. Additionally, he's been so popular as a mascot that the character has appeared on all sorts of merchandise. 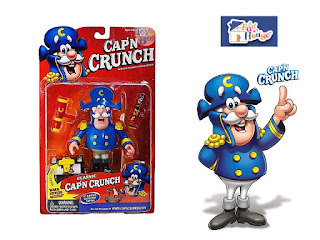 Today, we're looking at 2002's short lived action figure line from Funhouse (also short lived). Though the series was intended to include four basic figures, two deluxe "animals" and vehicles, only two of the figures actually made it to production.

We got the man himself, Classic Cap'n Crunch, and Pirate Jean LaFoote with Squawky. Each one featured a fantastic array of accessories as well as bonus stickers inside each blister card. Additionally, the cards themselves were labeled as a 1st Edition Collector's Series.

The figures themselves are limited in articulation, but make up for this in troves with their spot on sculpting of the characters. Cap'n Crunch is a mascot that even people who don't eat "his" cereal recognize immediately, and these figures definitely can't be mistaken for anyone other than they are. 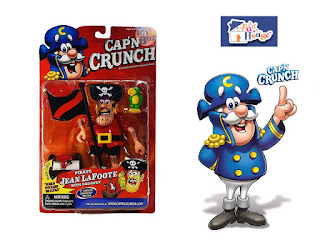 As mentioned above, Funhouse planned a few more items in the line that never made it to fruition. The two basic figures, Deep Sea Cap'n Crunch and First Mate Sea Dog were showcased on the back of the cardback. However, the mini-sub, S.S. Guppy and deluxe Loche and Fishy Friends (one deluxe figure pack) and Tinker and Walter (the second deluxe pack) were not showcased on the packaging at all. Some websites have production photos of the items that were intended for release, but it is unknown if any of the prototypes ever made it to the hands of collectors.

The figures are rather rare these days, but regardless of this they typically don't sell. This may be due to sellers asking far more than people are willing to pay - Roughly $35.00 to $75.00 per figure (mint on card). It could also be that very few people know about the line.

Unfortunately for Funhouse, they only managed to produce two short lived toy lines before going out of business. This one, and Dragon Master.

Click "HERE" to go back to the home page. For more posts related to this one, please click the labels below.
Posted by The Toy Box on December 11, 2017
Email ThisBlogThis!Share to TwitterShare to FacebookShare to Pinterest
Labels: 2000's, Cap'n Crunch, Funhouse