Many people know Usagi Yojimbo for his numerous appearances in Mirage's Teenage Mutant Ninja Turtles as well as the 80's TMNT cartoon - Which lead to the highly popular figure back in the day. However, Usagi is far more than just a here and there sidekick / ally to the Turtles. In fact, his real name isn't even Usagi Yojimbo. It's Myamoto Usagi.

Usagi began his comic book history in 1984 when creator Stan Sakai who conceived the character as a supporting role in The Adventures of Nilson Groundthumper and Hermy. However, as Sakai developed the character, he also created a world where he felt readers would be drawn into. Though he appeared in a few books here and there, it wouldn't be until 1987 that Usagi Yojimbo appeared in his own comic book title which is still being published today.

What has helped Usagi to become so popular is his inclusion in multiple crossover titles. This is made possible by Sakai who is the sole rights owner of the character. As such, he can determine when and where his character makes an appearance without having to first wade through the typical legal red tape which would accompany a corporate owned entity.

It's no doubt his appearance in Teenage Mutant Ninja Turtles made Usagi Yojimbo a household name among kids of the 80's, but it's only fair to say this is definitely not a one and done character. As we said above, he's by no means only a sidekick. 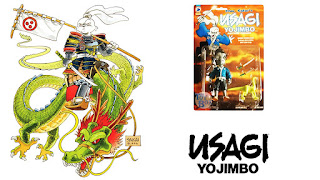 By 1998 Antarctic Press were struggling to find a foothold in the action figure market. They had released a few obscure lines since 1996, but had yet to produce that one item which would put them on the map. One of their last attempts was the very small, very short lived Usagi Yojimbo line.

The series is technically a one shot, with only Usagi being produced. However, it does contain some variants / exclusives. The mass market figure was produced on an orange card while the exclusives were produced on blue ones making them easily distinguishable.

If you're looking for a plastic version of Usagi Yojimbo which is spot on to his comic book iteration, then look no further. This figure captures all those details in magnificent detail with just the right amount of articulation. For added fun, the figure even comes packaged with a Tokage - Which for those of you who don't know, this is simply a dinosaur like creature which roams freely around the world of Usagi. Unfortunately for Antarctic Press, 1998 was the last year for them. It seems they were unable to really make make an impact in the world of action figures, and like so many before (and after) them found themselves going out of business.

What makes this all the more unfortunate is the fact that these days the Usagi Yojimbo figure is not only scarce, but also rather expensive on secondary markets. The variants will set you back anywhere from $40.00 to $60.00 a piece. The orange carded figure will set you back anywhere from $20.00 to $40.00. Not a bad profit for a line nobody wanted when it was originally released.