Merry Christmas, Toy Box readers! Yes, once again Christmas falls on a Monday, which means just like any other Monday of the year we bring to you another post. Coincidentally, this is also our last for the year as the new year falls on a Monday as well. Let's ring in the holidays together!

To wrap up the year, we thought it would be fun to have a look at one particular toy type, and not necessarily a specific brand. If you haven't guessed already, it's cap guns. 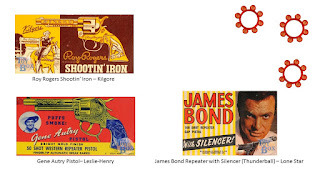 For many of us, playing with cap guns was as common as action figures. We came from a time where things were simpler, quieter, and more importantly, safer. Parents didn't fear that giving their child a toy gun would turn them into a raging psychopath - Which for the record it won't. Nor did they have to worry that their kids running through the neighborhood with toy guns would get shot by some moron thinking they were being invaded. Perhaps people from prior decades were also more intelligent.

Whatever the reason, cap guns, and toy guns in general, aren't all that common these days. As we said in our post related to Star Wars blasters, it's actually kind of sad. Kids of this generation don't seem to get to be kids anymore. It's all about hurry up, and grow up. 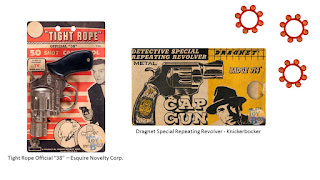 We digress though. Let's not make this post about sad things. Let's focus on the topic at hand; cap guns.

For generations children have been having a blast (puns) with cap guns. They can be found in all shapes and sizes as well as all types - pistols, revolvers, rifles, machine guns and even ray guns. If you were a kid with an imagination, there was a pop gun to match your particular made up adventure.

As collectibles, most cap gun collectors tend to go for the ones based off of famous characters such as The Lone Ranger, Roy Rogers, James Bond and more. If it was a popular "action" television show between the 1930's and 1950's or film, chances are fairly high that a cap gun (or some form of toy gun) was produced. Mind you, that's just the ones based on pop culture characters. There are perhaps double or triple (if not more) of non franchise related cap guns as well. 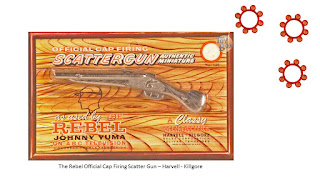 Since their inception, cap guns have been produced in die cast metal, plastic, and the die hard vintage collector's favorite, cast iron. Then of course there are the numerous companies which have come and gone over the decades who have produced some of the best cap guns to date; Hubley, Kilgore, Marx, Halco and Daisy (to name a few).

While many a collectors choose their favorite cap guns based on aesthetics or product license, there is another factor which shouldn't be overlooked - The caps of course. 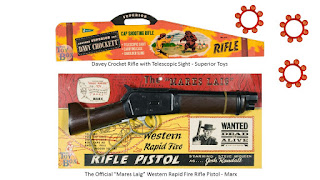 You can't have a cap gun without caps. They're what give the gun that distinctive bang sound, a puff of smoke and that familiar scent. Caps have been produced in numerous different styles, which unfortunately limits which guns they can be used in. 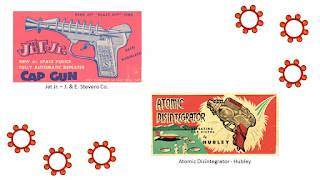 The most popular form of cap is the roll cap. This in turn makes the guns that use them all the more popular.

The primary explosive in most caps is called Armstrong's Mixture. Taken from Wikipedia;

"Armstrong's mixture is a highly sensitive primary explosive. Its primary ingredients are red phosphorus and strong oxidizer, such as potassium chlorate and potassium perchlorate."

Yup - Means nothing to most of us beyond if it goes bang, we smile with glee.

In addition to roll caps, several manufacturer's have also produced ring caps which are common in revolver and / or rifle style cap guns. Each ring can hold anywhere from one to twelve, with eight being the most commonly found / utilized. 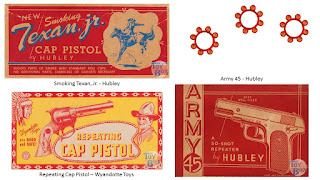 Though not commonly used, caps can also come in single row strips. These caps were far more common in the 1980's, and utilized for uzi type cap guns or other such automatic weapon style toys.

What makes pairing up caps with specific guns sometimes challenging is the fact that many cap gun companies didn't actually produce caps in house. Companies such as Buzz Henry, Stevens, Kenton, and even the larger Hubley and Marx never release caps. Instead, they relied on the already well established market of competitors and 3rd party manufacturers. In fact, there are probably more companies that produce caps than the actual guns. We're not sure if this was a result of far more licenses / experts being needed when working with explosives. Sounds pretty convincing as an argument though. 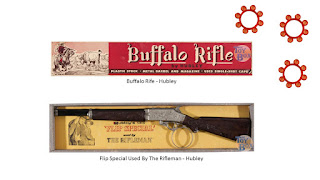 Despite being mini explosives, caps and cap guns have been determined as safe for use by product safety testers. With the exception of a burnt finger here and there on the paper roll caps, we can honestly say we've never had any accidents that resulted in anything beyond waving our finger in the air to cool it off.

As time has gone by, to make the guns aesthetically different from real guns many toy company's began developing their cap guns with bright orange tips at the end of the barrel. The downside to this was that many children would pry them off with a pair of pliers. Toy company's have also taken to producing the guns in fully painted bright color schemes. Whether these have helped to achieve the safety level intended is another story. However, this seems to be more so a problem with society, and not necessarily the guns themselves.

It would be impossible for even the most die hard toy enthusiast to nick the surface of the immense amount of cap guns that have been available since their inception in the mid 1860's. The largest collection in the world is currently denoted as belonging to Chuck Trois, former guitarist of Expressway To Your Heart. His collection is so massive he admits he doesn't even know how many he owns. If you're ever in Fredericksburg, Texas, stop by the 5,000 square foot museum where they are displayed. 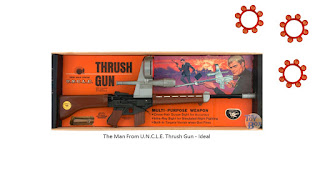 As for the kids of this generation (and most likely beyond), they'll have to suffice with more diverse style toy guns. Ones that in essence are guns, but it's disguised to not be one...So shhh don't tell mom. 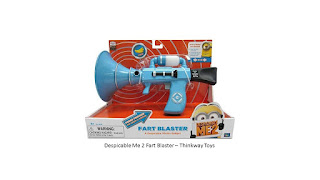 You know, ones such as the Fart Blaster from Thinkway Toys Despicable Me 2 line.

Yes, we live in a world where if you're going to play toy guns with someone else, then (one) it can't look like an actual gun, and (two) it has to make a grueling, disgusting fart sounds as opposed to live ammunition ones. After all, it's far more appropriate to teach our children to be offensive than promote any such form of violence.

P.S. The Fart Blaster is tons of fun. See you next year, Toy Box readers!