There's no denying that Marvel Comics helped to appease fans with new stories in between each episode of the Original Trilogy. There's also no denying that it helped keep general public interest for three years after Return of the Jedi until the series ended in 1986. 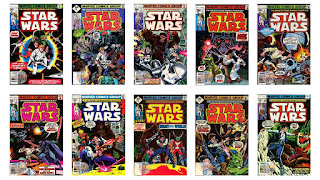 Marvel's story lines weaved in and out of the Original Trilogy seamlessly from book to book, all while bringing fresh ideas, new characters and locations to the Star Wars universe - Many of which that are still considered cannon in the Star Wars timeline.

However, the history of Star Wars appearing in a Marvel Comic was not as obvious a choice as it would be today for the publisher. Initially when Charles Lippincott, Lucasfilm's publicity supervisor, spoke to Stan Lee about publishing the books, Lee declined. Upon a second meeting, Lee finally agreed, but only if a contract was signed that stated no royalties would be considered until the books sold 100,000 copies. 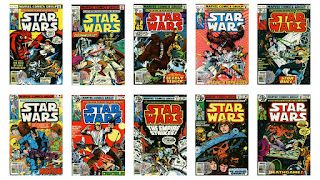 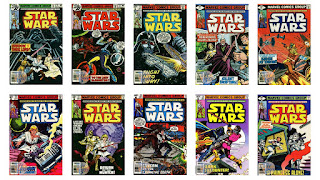 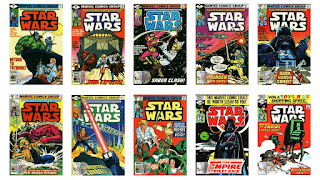 Not only did the books quickly surpass this sale point, but they are also credited for saving Marvel Comics (financially) in 1977 and 1978. Of course, this also meant that Lippencott had a very strong leg to stand on in terms of negotiating royalties. 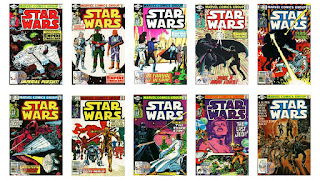 The series began with (and was initially conceived as) a six issue mini series adaption of A New Hope (of course, simply entitled Star Wars in those days) which was developed by Roy Thomas and Howard Chaykin. When the series skyrocketed in popularity, Marvel procured the rights to continue with a monthly series which lasted through issue 107 (and three annuals).

Notable artists and writers on the series consisted of the likes of; Archie Goodwin, Carmine Infantino, Al Wiliamson, David Michelinie, Walt Simonson, Ron Frenz, Jo Duffy and Cynthia Martin. Martin's work is most notable for its Japanese influenced style of art, as well as her sense of movement during action scenes. 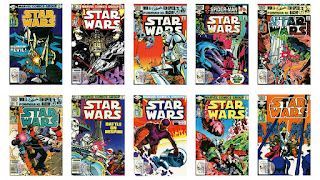 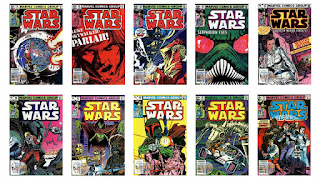 Marvel also incorporated a six issue run of The Empire Strikes Back in 1980. The mini series ran from issue number 39, and concluded in issue number 44. 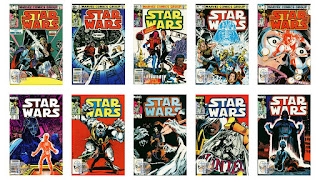 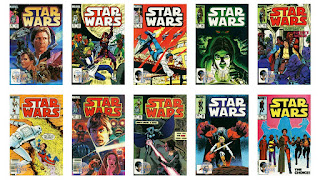 The series was also printed and published in the UK. However, this iteration of the series was a black and white printing, which broke each monthly issue down into weekly installments. As a result, it would take anywhere from three to four weeks for a full issue to be available in the UK. 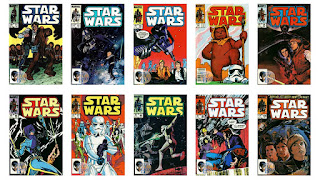 The series is also notable for shifting titles. For example, when it was first released, it was known as Star Wars Weekly Magazine. Issue 118 shifted the title to The Empire Strikes Back Weekly. The title then shifted to monthly releases with issue 140, which meant the "Weekly" portion had to be removed from the title. The book then reverted back to simply Star Wars with issue 159. The series concluded with issue 171.

When it came time for a Return of the Jedi comic adaptation release in the UK, the series began again, but started with issue number 1. The books were called Return of the Jedi Weekly, and ran for 151 issues. The series is also notably for being the first of its style to be printed in color. 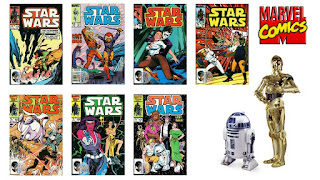 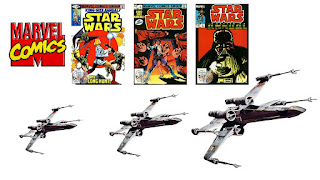 Since its end, there have been numerous other publishers that have produced Star Wars books. Dark Horse Comics alone is credited for creating well over 100 different titles. However, none hold as tight a reign on the nostalgic look and feel as those original 1970's and 1980's Marvel titles. Featuring great storytelling, wonderful art, and characters you won't find anywhere else, these are definitely books any Star Wars fan should check out.

Of course, let's not forget the Marvel adaptions of Return of the Jedi which were published between 1983 and 1984. Though it stands as its own mini series, numbered one through four - respectively, these are easily integrated into the monthly series. 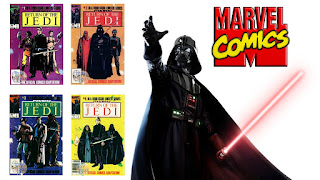 Click "HERE" to go back to the home page. For more posts related to this one, please click the labels below.
Posted by The Toy Box on May 25, 2017
Email ThisBlogThis!Share to TwitterShare to FacebookShare to Pinterest
Labels: 1970's, 1980's, Comic Books, Marvel Comics, Return of the Jedi, Star Wars, The Empire Strikes Back