One of the most interesting aspects to the history of comic books (for us) is to see how titles evolved into the icons they became. Take Amazing Fantasy number fifteen. Pretty much every comic book connoisseur knows that this was the first appearance of Peter Park / Spider-Man. However, what many fans don't know is that if you go looking for Amazing Fantasy number one through fourteen, you'll never find them. Why? Because they don't exist.

The series that would eventually become Amazing Fantasy started in 1961 as Amazing Adventures. The story points for most of the issues revolved around science fiction or drive-in-movie style monster characters. Each story was drawn by either Jack Kirby or Steve Ditko - Legends in the Marvel Universe. 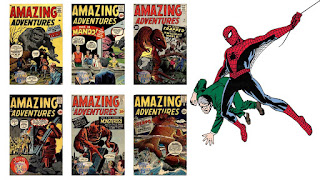 After issue number six, Amazing Adventures changed its title to Amazing Adult Fantasy. This iteration of the series stayed focused on its original premise of monsters and science fiction. The stories were drawn by Jack Kirby, and written by an up and coming Stan Lee. 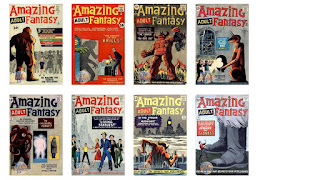 All of this culminated in what would be the equivalent of a meteorite hitting the heart of a city with issue fifteen. Now titled simply Amazing Fantasy, the cover introduced the world to Spider-Man in 1962. The world of comic books would never be the same. 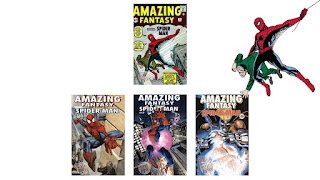 Marvel continued the Amazing Fantasy title decades later in the 1995 - 1996 series of the same name. Unfortunately it was really just a gimmick, and the books never caught the magic of that first appearance of Spider-Man - Not that they were intended to.

Click "HERE" to go back to the home page. For more posts related to this one, please click the labels below.
Posted by The Toy Box on May 15, 2017
Email ThisBlogThis!Share to TwitterShare to FacebookShare to Pinterest
Labels: 1960's, 1990's, Amazing Adult Fantasy, Amazing Adventures, Amazing Fantasy, Comic Books, Marvel Comics, Spider-Man