Much like our prior post on Marvel Comic's Amazing Fantasy, EC Comics has an interesting history of title shifting before striking with lightning. Today we're taking a look at how EC Comics evolved several titles during the 1940's into one of the most beloved series of all time - Tales From The Crypt.

It all started in 1947 with the series International Comics. The stories focused mainly on satire style horror, and really didn't feature a cast of characters that were all that notable beyond the "monsters" that were terrifying each page.

Horror comics were popular among GI's returning from World War II who had grown tired of the super hero genre from their youth. These now adult males were more interested in tantalizing tales full of violence and sex. 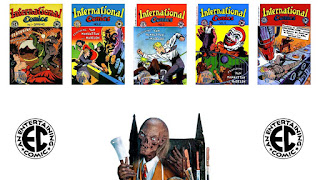 In 1948, EC shifted the title to a more crime (cops and robbers) type format. However, in doing so, they still kept the monster aspect intact for the series. International Crime Comics lasted for one issue, continuing the numbering scheme where International Comics left off, before the title was changed again. 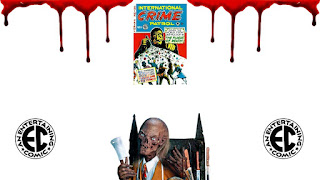 Under the banner of Crime Patrol, the title continued the numbering from where International Crime Comics left off. This iteration of the series lasted for two years focusing on crime and monsters before change would come again. 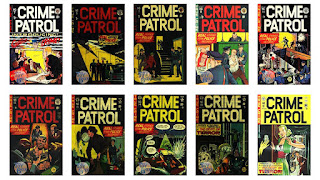 The Crypt Of Terror
EC Comics
1950

Once again continuing the numbering scheme from its predecessor, The Crypt of Terror removed the crime aspect of the series, shifting the focal point of the series to that of straight up horror / murder. It was with this element that the book shifted into it's last, and most popular iteration... 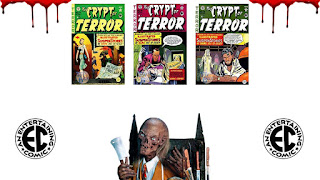 Though many fans of the series know of it due to the vintage HBO series which featured a cackling Crypt Keeper ghoul, the comic book didn't actually feature this version of the character. Yes, there was a Crypt Keeper, but it was simply a mysterious with a cane, and long hair running down his face to hide his features. However, the Keeper was not limited to just hosting each story. He occasionally made appearances which stood to tell his biography in bits and pieces. Additional hosts in the series were the Vault Keeper, and Old Witch. 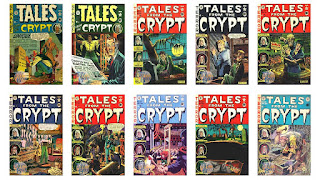 Tales From The Crypt ran from 1950 - 1955, and quickly became one of EC Comics most popular titles. Unfortunately by 1954, horror genre comics came under heavy fire by the public, and sales declined rapidly after that point. 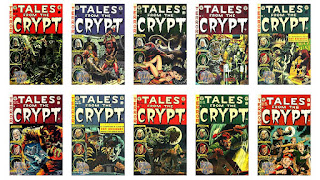 Violent comics in general were being blamed for the decline in behavior of America's youth which all came to a head in a senate hearing which targeted comic books directly. Rather than be censored by an outside source, the comic industry agreed to form two groups - Comics Magazines Association of America (CMAA), and the more widely recognized Comics Code Authority (CCA). These groups placed strict stringent on comic book publishers, forbidding them to publish books with words such as terror and horror in their titles, and additionally forbid the depiction of what was deemed gruesome characters. 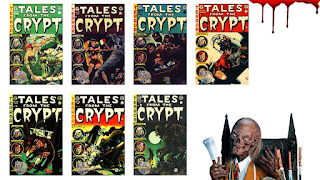 Seeing a no win situation, and feeling directly targeted, EC Comics shut its doors after releasing its final Tales From The Crypt issue in February / March 1955.

Tales From The Crypt would see a major resurgence in popularity in 1989 with the HBO series which ran for 93 episodes between 19898 and 1996. Theatrical movies were also produced and released with the banner throughout the years of this newly revived popularity. All of this helped to solidify EC Comics original comics in history - So we suppose they got the last laugh.

Click "HERE" to go back to the home page. For more posts related to this one, please click the labels below.
Posted by The Toy Box on May 22, 2017
Email ThisBlogThis!Share to TwitterShare to FacebookShare to Pinterest
Labels: 1940's, 1950's, Comic Books, Crime Patrol, EC Comics, International Comics, International Crime Comics, Tales from the Crypt, The Crypt Of Terror