Wow, who would have thought that Patriots would come back in the 4th quarter to take the Superbowl into overtime, and then win the game? It's unheard of what they did. Tom Brady's salary just went up immensely!

For a character that goes all the way back to 1963, and has numerous iterations in books, toys and television, we sadly know little to nothing about the character. We've never seen any of the shows, never read any books. I guess you could safely say that in general we have little to no interest.

What we do know about the show is that the "original series" ran from 1963 all the way through 1989. Since then there have been numerous attempts to relaunch the series, but with mild success until the 2014 iteration.

One of the most note worthy aspects of the show is that when a particular actor would leave his respective roll as the Doctor, the next actor hired would be given the next consecutive number. Thus the numerous versions of Doctors from First through the now current twelfth. Throughout the various shows it was common that prior Doctors would reprise their roles in a cameo appearance. As such, Doctor Who could be considered one of the longest running consecutive shows in history. "From a certain point of view" - Ben Kenobi.

Despite our lack of knowledge of the series, we do enjoy a classic eight inch action figure line, and these from Denys Fisher fit in perfectly with any of your standard Megos - Right down to their packaging.

Because this particular line was produced in 1976, it falls in line with the Tom Baker iteration of the Doctor - AKA Fourth Doctor. A great choice considering that in a recent poll his portrayal is considered the most popular iteration to date.

There were six figures produced, and one "accessory", the Tardis. Each one was sculpted with meticulous detail for its time, and featured that classic hand stitched clothing that was common place with any good quality eight inch line. 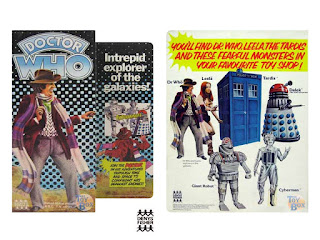 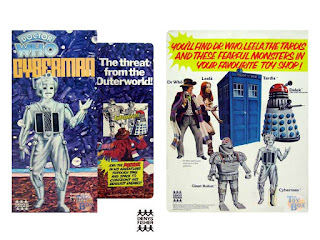 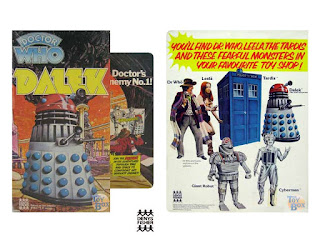 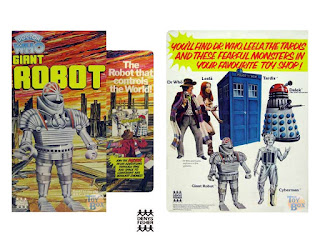 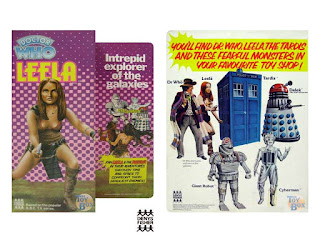 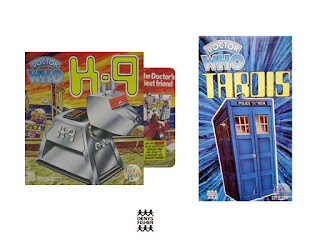 Now for the bad news. If you're looking at adding these to your collection, start saving now. Complete figures with the box (new or used) can set you back upwards of $500.00 a piece. This is not a line for the faintest of collectors. Additionally, the majority of these figures are not common. While you can find the Doctor and Dalek here and there, the rest are incredibly scarce.

Click "HERE" to go back to the home page. For more posts related to this one, please click the labels below.
Posted by The Toy Box on February 06, 2017
Email ThisBlogThis!Share to TwitterShare to FacebookShare to Pinterest
Labels: 1970's, Denys Fisher, Doctor Who