This particular 1993 Kenner line falls in between the original 1991 to 1992 Terminator 2 line, and the latter produced 1997 Terminator 2 3D (AKA Battle Across Time). Kenner was finding a fair amount of success in toy isles due to the massive momentum of James Cameron's highly anticipated sequel, and the company hoped to continue raking in cash by expanding into further lines based on the characters.

Future War featured eight new figures, but sadly stopped there. No vehicles or playsets got incorporated into the line, leaving it rather hollow for those who didn't have the predecessor line. The series also focused heavily on variants of the Terminator - A whopping six of them out of the eight total figures available. Furthermore, the two villains in the series, Cyber-Grip and Kromium were 100% Kenner created for the line. 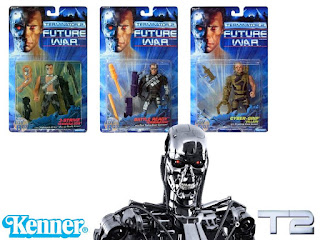 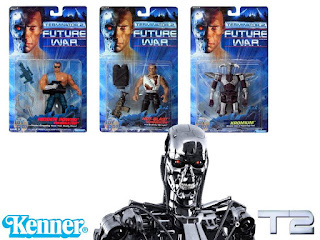 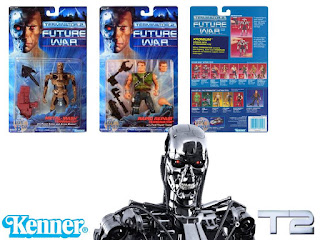 If you look closely at the cardback above, you can see that Kenner definitely planned for this series to be a continuation from their prior line. It depicts the eight figures from this series, and then encourages children to collect the rest of the Terminator figures available - I.E. the prior series.

It's probably no surprise to anyone that there is little value in these figures on secondary markets. They are readily available, and can be obtained for as little as $3.00 each, mint on card. If you're in to the Terminator, and wanting to add some figures to your collection, the time is now to jump on these. They're cheap, and easy to find.

Click "HERE" to go back to the home page. For more posts related to this one, please click the labels below.
Posted by The Toy Box on February 13, 2017
Email ThisBlogThis!Share to TwitterShare to FacebookShare to Pinterest
Labels: 1990's, Future War, Kenner, T2, Terminator 2, Terminator 2 Future War, Terminator 2 Judgement Day