Doctor Dolittle began his fictional career in the 1920 "The Story of Doctor Dolittle" by Hugh Lofting. His love for animals results in a menagerie of household pets that scare off his human clientele. This leads to his inevitable loss of wealth. However, after learning to speak to animals from his parrot, he takes up a veterinary practice.

Since then, Dolittle has had many adventures in the pages of books, and on the small and big screen. One of his most famous iterations was the 1967 live action film which featured Rex Harrison as Dolittle.

It would be this iteration that the 1967 Mattel line would be based on. Unfortunately for fans, it was short lived. The series features just one character - Doctor Doolittle, and one creature, his Pushmi-Pullyu. 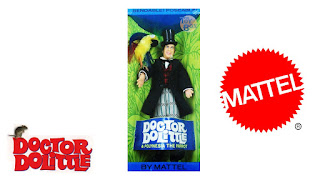 For those looking to purchase this figure mint in the package, be sure it has its cellophane wrap. The wrap is incredibly fragile, and as such, finding one in true mint condition can prove difficult, but not impossible.

There were two versions of the Pushmi-Pullyu. One features a pack in of the Doctor Dolittle figure, while the other is just the animal. 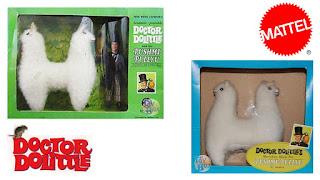 For its age, it's surprising that the figure of Doctor Dolittle is neither rare nor valuable. Sealed in the box versions have sold for as little as $15.00, with the highest being no more than $30.00. The Pushmi-Pullyu is a little harder to come by, and sealed with the figure can sell for as much as $150.00. The individual creature sells for around $30.00.

Click "HERE" to go back to the home page. For more posts related to this one, please click the labels below.
Posted by The Toy Box on February 27, 2017
Email ThisBlogThis!Share to TwitterShare to FacebookShare to Pinterest
Labels: 1960's, Doctor Dolittle, Mattel, Rex Harrison