Walk the Line / Cash (State of the Art Toys)

Admittedly we know very little about Johnny Cash beyond the handful of song we heard playing on our parent's 78's, and of course the 2005 movie Walk the Line staring Joaquin Phoenix and Reese Witherspoon...Oh, and Walk Hard: The Dewey Cox Story staring John C. Reilly and Jenna Fischer. The man in black has songs we know, but we're not necessarily his biggest fans by any stretch. 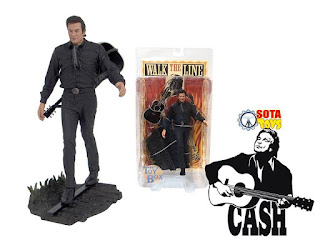 Because our post on his history would be based on the above, we'll go ahead and spare the Cash fans out their of our impromptu history lesson, and jump right into the figure.

State of the Art Toys produced a Walk the Line / Johnny Cash figure in 2005 for Fox to distribute as a promotional item for the upcoming film. For what it's worth, this figure isn't bad. It certainly captures the look of Cash from the head sculpt to the black head to toe clothing.

If you look closely, you'll notice that the backdrop for the package is actually the poster for the 2005 film. Not a bad touch at all.

Mind you, this wouldn't be the only version of the figure. State of the Art Toys also followed up with a retail version - Or rather, specialty shops version. 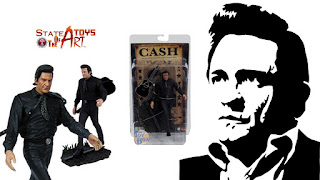 The retail version, known as Cash, featured a wanted poster backdrop, but the same figure inside.

In general neither version is any more desirable than the other. Both the Fox promo and Cash versions can be found for as little as $9.00 here and there. High end sellers have been known to get as much as $30.00 for them, but more so the sales benchmark at about $16.00.

Personally, we'd rather have a Dewey Cox figure, but that's just us.

Click "HERE" to go back to the home page. For more posts related to this one, please click the labels below.
Posted by The Toy Box on August 29, 2016
Email ThisBlogThis!Share to TwitterShare to FacebookShare to Pinterest
Labels: 2000's, Johnny Cash, SOTA, State of the Art Toys, Walk the Line