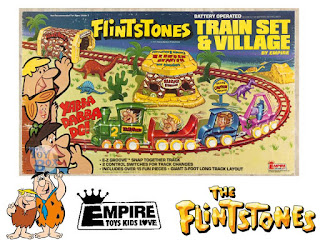 We don't cover many trains here at The Toy Box. In fact, this could very well be our first one. It's certainly a great one to start with. Empire's Flintstones Train Set & Village. The set features a giant three foot track that snapped together with EZ grooves, and over fifteen pieces which included; Bedrock Station, building and dinosaur pieces and each of the main characters in their own unique train car. Best of all, the heads revolved as the train moved around the track.

This is truly a classic item for any Flintstones fan! 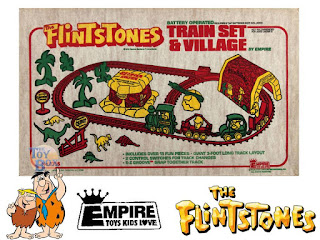 In 1978, Empire re-released the the set in a green box, calling it simply The Flintstones Train Set. It included all the same pieces and features as the 1974 release, but oddly enough this latter version is much more difficult to track down.

Click "HERE" to go back to the home page. For more posts related to this one, please click the labels below.
Posted by The Toy Box on August 08, 2016
Email ThisBlogThis!Share to TwitterShare to FacebookShare to Pinterest
Labels: 1970's, Hanna-Barbera, Joseph Barbera, The Flintstones, Train Set, William Hanna