As of 2016, The Venture Bros. is the longest running animated show aired on Adult Swim, and there's good reasons for that. For starters, it can be pretty funny at times. It has villains such as The Monarch that you can't help but feel sorry for, and wish he would just catch a break and win. Then of course there's the over the top violence of Brock Samson as he goes on a rampant rage of destruction in any way possible. Now that we start listing this out, really every character has a unique life of their own which comes with funny quirks. We could honestly list something about everyone.

As we've seen with prior Adult Swim related action figures, it can sometimes be a challenge to find a strong foothold in the market even when you have such a popular source material as your canvas. Bif Bang Pow started off with a hug bang (no pun intended), hitting the market with seven unique figures, and a handful of variants. 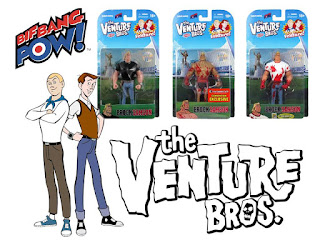 The series launched with pretty much everyone in the main cast being present - Brock Samson, Hank and Dean Venture, Doctor Venture, Phantom Limb and of course Mr. and Mrs. The Monarch. The series also included numerous exclusives variant - Most of which were based on Brock Samson. 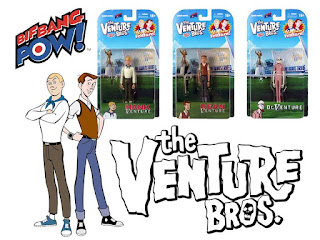 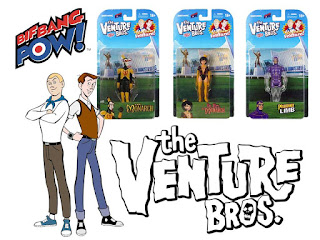 In this day and age, toy developers love giving fans something to chase after. Bif Bang Pows answer to this was the yellow unpainted test version of The Monarch. The figure was limited to just 500 pieces, and released in retail cases as a chase variant. 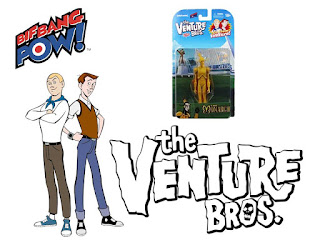 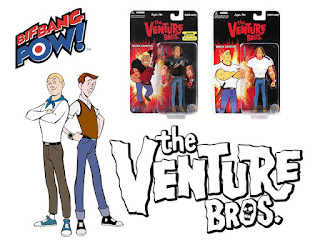 The beauty of these figures is that they're all relatively cheap to obtain. If you're buying individually, you can expect to pay $15.00 to $20.00 each. However, when buying multiple figures at a time, the price can equal out to as little as $5.00 per figure when dividing the total price by how many figures you're getting. If these are figures you've been interested in getting, now is definitely a good time to jump on them.

Click "HERE" to go back to the home page. For more posts related to this one, please click the labels below.
Posted by The Toy Box on August 15, 2016
Email ThisBlogThis!Share to TwitterShare to FacebookShare to Pinterest
Labels: 2010's, Adult Swim, Bif Bang Pow, The Venture Bros