We knew that this day would come eventually, and we can honestly say that despite the inevitability of it, it doesn't make it any easier. As most of you have probably heard by now, Kenny Baker, the man behind one of the most famous robots in movie history has passed away at the age of 81. Sources report that for several years he had been struggling with poor health. 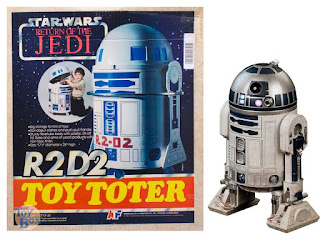 As a tribute to the man behind R2-D2, we offer for you a look at a toy related item that put the droid front and center - The R2-D2 Toy Toter from ATF (American Toy and Furniture). Standing at 28 inches high, this was the perfect toy box for all your favorite Kenner Star Wars toys. It featured wheels on the bottom for easily rolling it around your room, and a hoop handle to pull it by.

Not only did it make the perfect toy tote, but with a little imagination and your Star Wars blaster, it made a great R2-D2 to incorporate into your playtime as you acted out your own Star Wars adventures. We know we did just that as kids, and we're sure many others did as well.

Quite honestly though, we don't want to talk about Star Wars toys right now. Instead, we want to remember the man that brought R2-D2 to life. 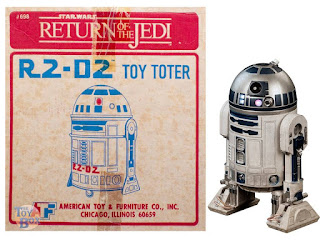 Kenny was born in August 24, 1934 in Brimingham, England to parents of average height. In his young years, he wanted to follow in his father's footsteps, and become an engraver. However, a lack of sufficient educational credits brought that dream to an end - Thankfully for many of us out there.

In 1951, Baker was approached by a woman on the street that was looking for little people to join a theatrical troupe of dwarfs and midgets. This step into show business took him next to the circus, and later to ice skating. After a brief stint in movies starting in 1960, Baker formed a comedy act called the Minitones with Jack Pruvis where the duo caught the eye of one Mr. George Lucas.

Both actors were brought in to join the cast of Star Wars, Kenny of course landing the roll of R2-D2, while Purvis joined as the Chief Jawa. From there, as they say, the rest is history. The duo acted together in numerous Lucasfilm and Jim Henson productions from that point on. 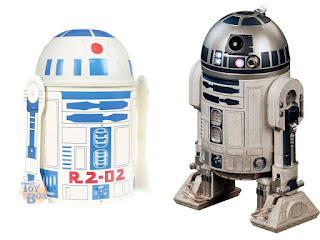 Kenny continued to act in bit parts here and there after his high point of the Star Wars Trilogy, and in the 90's returned for a brief stint in stand-up comedy. Of course, he's also one of very few actors that can claim to have been in all six of the George Lucas era Star Wars films.

Additionally, he was a regular member of the Star Wars family to return to conventions over the years to meet with fans and "give" autographs. Whenever meeting with fans, or giving interviews, he always seemed appreciative for the opportunities that being in Star Wars allowed him, and in general genuinely happy to meet with fans of the Saga. He always had a smile on his face, a glint of joy in his eyes, and kind words for everyone he spoke to.

Despite his vast list of credits in films from 1960 to 2015, Baker will forever be known to millions as the one, the only, R2-D2. It's sad that we have lost such a brilliant actor, and such a caring human being. We will miss you Kenny Baker, but you will forever live on in the hearts of millions of Star Wars fans around the world. You may have been small in stature, but your legacy is larger than life.

Click "HERE" to go back to the home page. For more posts related to this one, please click the labels below.
Posted by The Toy Box on August 13, 2016
Email ThisBlogThis!Share to TwitterShare to FacebookShare to Pinterest
Labels: 1980's, American Toy and Furniture, ATF, Kenny Baker, R2-D2, R2-D2 Toy Toter, Toy Toter