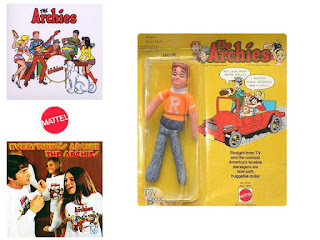 We touched on Archie, and The Archies in our post based on Marx Toys The Archies back in December 2015. As such, we're not going to dive deep into the overall premise of the band, nor the characters in general as we've already covered that.

Instead, we'll jump right into Mattel's 1977 line of the same name. Admittedly these don't look as good as the 1975 Marx line - Both in quality and overall design. If we had to nitpick, the yellow card back is rather horrendous to look at too. Overall, it's just not the best we've seen nor come to expect from such an established company such as Mattel.

Its interesting that the artwork depicts the characters as their standard design teenager / high school appearance. The figures look more so like what the characters would have looked like when they were in elementary or middle school - I.E. very young. 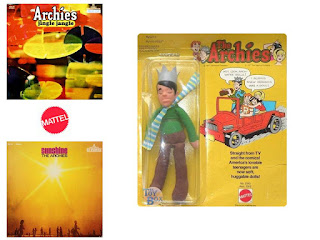 The series featured four figures, and oddly enough Betty was not one of them. Rather, it was Archie, Jughead, Veronica and Sabrina. This in and of itself is a unique twist to draw in Archie fans as Sabrina wasn't typically a forefront character in the Archie comics - Unless she was headlining her own stories. So to include her in the line was actually a nice treat for fans. 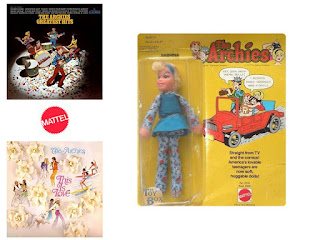 The figures were mostly made out of fabric, to and include their arms and feet. The only plastic that was utilized was for their heads. For the male characters, their hair was sculpted into the plastic. For the girls, they included the traditional doll hair of the era.

These days you can find the dolls here and there, (mind you, they're not in abundance) and fortunately for not all that much money. We've seen lots of the entire set sell for as little as $36.00. However, full sets being sold are a little less common than individual dolls. When buying individually, most sellers list them for around $20.00 to $25.00 a piece - Almost makes you want to just wait for a full set to become available, even if you don't need or want all the characters. You'd almost be better off buying a full set, then offloading the extras yourself. 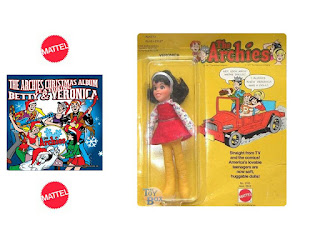 Now, you can't have an Archie line without his famous Jalopy. Mattel delivered probably the best piece in the line with this one and only vehicle produced for the series. It could easily hold all four dolls between the front and back seats. 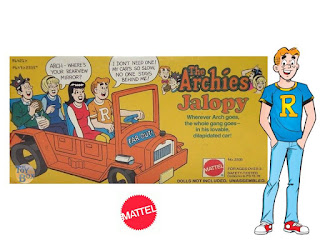 Unfortunately, the Jalopy is going to be the hardest piece to track down in the series.Though it's harder to come by, it's not going to hit your wallet too hard if you do find one. Mint in the box ones have sold for as little as $41.00.

Click "HERE" to go back to the home page. For more posts related to this one, please click the labels below.
Posted by The Toy Box on August 22, 2016
Email ThisBlogThis!Share to TwitterShare to FacebookShare to Pinterest
Labels: 1970's, Mattel, The Archies