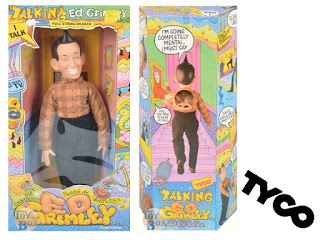 Ed Grimley is the character created by comedian Martin Short. Short started playing the character in the early 80's with The  Second City improv comedy troupe. When the actor joined SCTV in 1982, he brought with him the character for its television debut. Grimley became so popular that when Short moved on to Saturday Night Live that he continued to act as the character. 1988 would become the biggest breakthrough when Ed Grimley became the animated (and live action) star of his own television show, The Completely Mental Misadventures Of Ed Grimley.

With the character came the actors / alum of Second City's SCTV. Characters such as Count Floyd, The Amazing Gustav Brothers, Ms. Malone and her son Wendell were mainstays in each episode. Despite the success of the character, The Completely Mental Misadventures Of Ed Grimley only lasted one season - A total of thirteen episodes.

However this short lived run didn't stop Tyco from procuring the rights to a Talking Ed Grimley Doll, as well as a Stick-On Ed Grimley.

The talking doll stood sixteen inches tall, and with the pull of a string said phrases such as;

Mind you, those aren't the only phrases the doll says.

As is custom with pull string dolls, the discs inside are prone to warp over time if not kept in cool dry storage. As such, many dolls get that iconic squeaky chipmunk voice that toys such as this type are prone to get.

Depending on the condition, the dolls have been known to sell for as little as $10.00 in the box, and as much as $50.00. Just remember that the box condition shouldn't be your only factor in paying high end prices. Make sure you get one with a fairly good working voice feature. 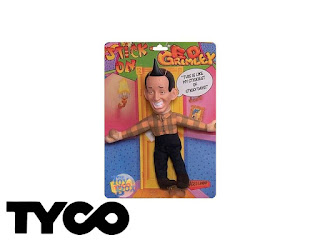 The Stick-On Ed Grimley was a much smaller plush doll with plastic head that featured suction cups on its hands for sticking to various surfaces - Thus the name, Stick-On. Unlike the sixteen inch doll, there's not much to really say about this one as it's fairly simplistic in nature.

Though it's not as common as the sixteen inch doll, the Stick-On Ed Grimley typically doesn't sell well on secondary markets. This is most likely a result of sellers pricing them too high (for what people seem willing to pay). Even at $15.00 they don't typically sell - Which is a shame because it's not a bad collectible if you're a fan of the character and / or show.

If you're a child of the 70's or 80's, then chances are incredibly high that you wore a Collegeville Costume brand costume at some point in your life - Either for fun, but most likely for Halloween. The company has produced so many iconic pop culture characters over the years - Raggedy Anne, Popeye, Gollum - Seriously, this list could go on and on, and one could amass an impressive collection just of costumes alone. 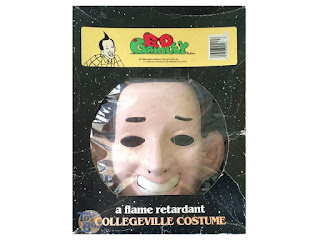 With so many characters under its belt, it's no surprise that Ed Grimley joined the fray in 1988. Though we don't personally know too many kids that dressed up as the character - There were more Ninja Turtles that particular year - We're sure somewhere out there that there was at least one child that was determined to be Ed Grimely on October 31, 1988.

These days you're bound to be able to find some form of vinyl costume based on your favorite character from the 70's and 80's from classic companies such as Collegeville Costumes, Ben Cooper, Inc. and / or Halco. However, they're sadly incredibly expensive, and rightly so. With how many kids wore them, tore them, or in general threw them out as they quickly grew out of them, there probably aren't honestly all that many to be found mint in the box.

Click "HERE" to go back to the home page. For more posts related to this one, please click the labels below.
Posted by The Toy Box on July 07, 2016
Email ThisBlogThis!Share to TwitterShare to FacebookShare to Pinterest
Labels: 1980's, Ed Grimley, Martin Short, The Completely Mental Misadventures Of Ed Grimley, Tyco