Whoops...Let that be a lesson to you. Never schedule a post that you haven't actually finished. As many of you may have noticed, we've done that with two posts recently. So, now we're doing a little backtracking to finish them.

We touched briefly on the history of Lost in Space in our post regarding the Toy Island release from 1997. So we'll skip the history lesson of the show, and jump right into the toys. 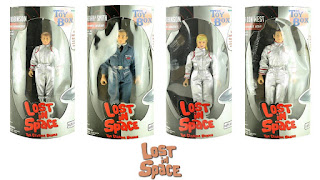 Right on the heals of the aforementioned Toy Island line was the 1998 - 1999 Trendmasters series. Unlike Toy Island which focused on a one and done remote control Robot B-9, Trendmasters covered much more ground. The line included dolls, various versions of Robot B-9, and even a vehicle. Unfortunately for fans, the items weren't necessarily designed and developed to be intermixed with each other. Rather, much like your typical LJN produced line, it was sort of all over the map.

The most common pieces from the series to be found are the tube boxed dolls which featured Dr. Zachary Smith, Judy Robinson, Major Don West and Will Robinson. 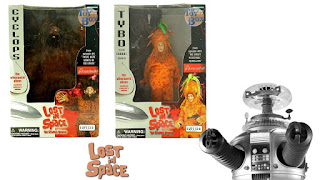 Though not boxed in the same style as the tube dolls, the two dolls in window boxes, Cyclops and Tybo the Carrot Man are also fairly common on secondary markets. You'll notice that we haven't really mentioned any prices just yet. This is because while the dolls in general are fairly easy to find, there sadly aren't many transactions going on between buyers and sellers.

In fact, Robot B-9 seems to really be the only draw to the series for collectors. The standard and chrome versions of the robot have sold for between $35.00 and $45.00 new in the box. Granted this isn't much of an increase in price from their original retail prices. 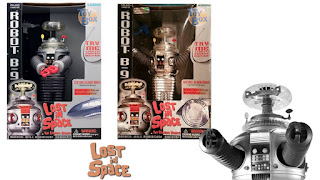 However, the massive Radio Control B-9 Robot is another story all together. This 24 inch robot is not only incredibly difficult to find, but it's also going to set you back anywhere from $350.00 to $500.00 to get one. 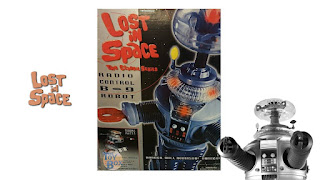 Though the Jupiter II spaceship has been found numerous times priced at around $450.00 (or more), the reality of it is that most collectors aren't willing to pay that kind of price for it. Mint condition ones in the box typically sell for around $250.00, with the occasionally one selling for slightly more. Mind you, its by no means cheap, but it's definitely not the price a lot of sellers are asking. 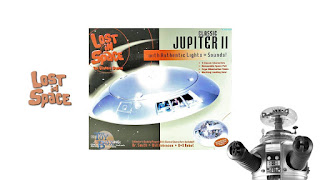 Which in turn could be the biggest challenge that the series faces in drawing fans in. Secondary prices are marked far higher than what most people are willing to even consider paying. It's really a no win situation for either parties. Buyers can't get the items they want because they're not going to pay double what their value is deemed, and sellers can't sell their products because they're asking way to much.

Click "HERE" to go back to the home page. For more posts related to this one, please click the labels below.
Posted by The Toy Box on July 18, 2016
Email ThisBlogThis!Share to TwitterShare to FacebookShare to Pinterest
Labels: 1990's, Lost in Space, Lost in Space the Classic Series, Trendmasters