This post is sadly more so a want list for us as we never have been able to track down a full set of the 2007 - 2010 Flash Gordon series from Bif Bang Pow. 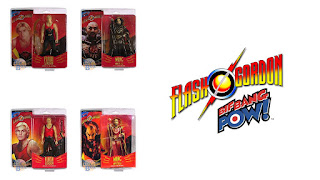 These days the figures are incredibly difficult to come by. However, oddly enough when they are found, they aren't all that costly. An autographed Flash figure sold for as little as $26.00. 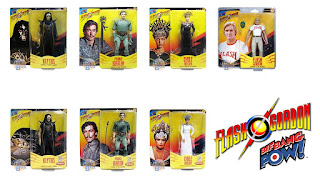 Though series 2 is far more commonly found than series one, it's still not in abundance. Oddly enough the SDCC versions seem to be the easiest to obtain.

Series two featured four new characters, Klytus, Prince Barin, Dale Arden and another Flash Gordon - This time in his white shirt from the first 1/4 (or so) of the film.

As mentioned above, this particular series featured a few SDCC exclusives. Interestingly enough, while series two initially was released in 2008, it wasn't until 2010 that the convention exclusives were produced.

Each exclusive was a slight alteration of their series two counterpart. Klytus no featured popped out eyes from his death scene in the film. Prince Barin featured whip lashes on his wrists from the scene leading up to Klytus' death, and Dale now featured a white wedding dress. 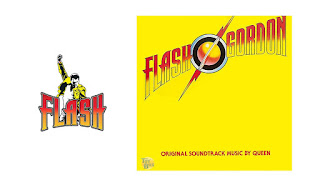 While the movie was amazing for its time, and still lives up to fairly good standards these days, probably one of our most favorite things to come from the 1980 film is the soundtrack. No, it doesn't feature a lot of Queen's finer pieces of music, but it does work well with the film. Who doesn't love to sing along with, "Flash, ah ah!" Not only that, but we simply have to give it a shout out because Queen is definitely one of our all time favorite bands here at The Toy Box.

The film had all the makings of a sequel, but unfortunately performed so poorly at box offices that it was soon destined for cult classic status as opposed to popular franchise. Making just 27 million in the USA based on its 20 million dollar budget, it was definitely considered a blockbuster bomb. While we are among the people that would have loved to see a sequel, we at least can live with the fact that as a result of performing so poorly that the franchise wasn't run into the ground with awful sequels made simply to cash in.

Click "HERE" to go back to the home page. For more posts related to this one, please click the labels below.
Posted by The Toy Box on July 11, 2016
Email ThisBlogThis!Share to TwitterShare to FacebookShare to Pinterest
Labels: 2000's, 2010's, Bif Bang Pow, Flash Gordon, Queen