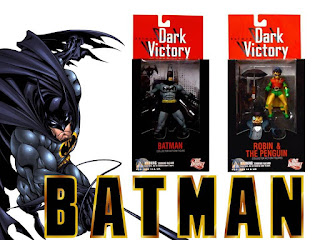 Batman: Dark Victory was a thirteen part series (14 if you include the Wizard exclusive #0) by famed comic duo Jeph Loeb and Tim Sale. The story is actually a direct sequel to the duos mini series, The Long Halloween. Though not touted as the best story to be produced by Loeb and Sale, it still garners high respect from Batman fans for its re-imaging of Robin's origin into the Batman legend, as well as for bringing closure to many characters introduced in Frank Miller's Batman: Year One.

In 2004, DC Direct produced a series of figures based on the story. Though it was only a handful of characters, they certainly chose some great ones to represent - Commissioner Gordon, The Scarecrow, and of course, Batman and Robin - The latter which also featured The Penguin packed in with him. 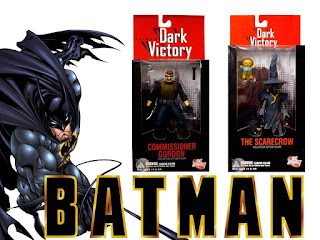 Unlike most Batman toys produced by DC Direct at this time, the ones based on Dark Victory aren't going to send you to the bank to request a second mortgage to obtain. The figures fluctuate between $15.00 and $25.00 for mint in the package ones - Not terrible considering some of the other Batman lines have been known to cost you upwards of $300.00 for one figure.

Great figures, and a story that too is great means that Dark Victory is simply awesome all around. Granted if you're going to read to books, you should probably check out The Long Halloween first so that you can get the whole story. Both series are definitely worth your while.

Click "HERE" to go back to the home page. For more posts related to this one, please click the labels below.
Posted by The Toy Box on July 25, 2016
Email ThisBlogThis!Share to TwitterShare to FacebookShare to Pinterest
Labels: 2000's, Batman, Dark Victory, DC Direct