We have wanted to do a post on Mattel's 1990 The Simpsons line for the longest time, but the opportunity never presented itself until now. 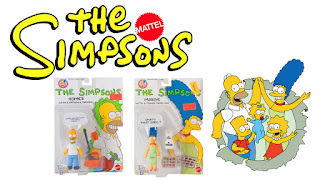 The Simpsons began its iconic climb to fame in 1987 when it was produced by Matt Groening as short sketches for the Tracey Ullman Show. After airing for three seasons, the show was developed for a half hour series, and helped to launch the relatively new Fox network. Since its debut in December of 1989, the series as aired over five hundred episodes, and though new episodes of the show continue to air as of this writing, it is rumored that season 30 will be its last - Something many claim to be too long, and others as not long enough.

Now rewind if you will all the way back to 1990 during the show's first season run. Simpsonmania was rising at a rapid pace. Many viewers tuned in to laugh at the absurd nature that Homer, Bart, Maggie, Lisa and Marge (as well as the several other soon to be hundreds of Springfield characters) acted out in outlandish ways that left some saying, "That sounds like my kids," and other protesting in appalled tones that a family could act in such a way. 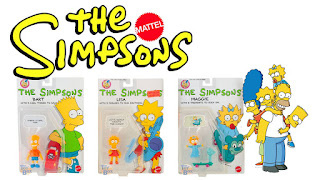 Keep in mind that during this time of world history that television was still considered wholesome (for the most part) with shows such as The Cosby Show, Family Ties, Growing Pains and Married...With Children providing good old fashioned morals and family values in half hour blocks. Those days were quickly coming to an end, and despite the hilarity of shows like The Simpsons, we can honestly say we miss those days.

Right, so where were we? Oh, right - Rewind if you will all the way back to 1990. Mattel got the distinct honor of being the first company to produce toy related merchandise for The Simpsons. Today we're going to take a look at the highly coveted "action figures" of that era. Now we know that many Simpsons fans will profess that this is far from all the toys that Mattel produced, and they would be 100% correct. Not only did Mattel produce the majority of the figures encompassed in this post, but also several other items such as wind ups, 11 inch dolls and water squirters (to name a few). All of these items technically fall into this line of The Simpsons merchandise, but sorry, we're not looking at those today. 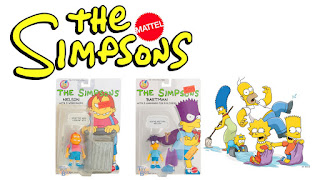 Mattel produced all five of the Simpsons family members which included Homer, Marge, Bart, Lisa and Maggie. In addition they produced Nelson, and Bartman. Each figure came packed on its own individual blister card showcasing character specific art, and featured character unique accessories. Each figure also came packed with five mini word bubbles with pre-printed phrases from the show. These word bubbles could be placed over the heads of each character in a cheap way to mimic that it was talking.

The oddly shaped cardbacks contribute greatly to the difficulty of finding the figures mint on the cards. Each card is cut along the right edge to frame the character artwork. It is because of these intricate cuts that many cards received various dings and bends. Sadly a lot of these imperfections weren't received while in the hands of collectors, but in the cases from the factories to the warehouses of the various retail chains. In short - The cardbacks are incredibly fragile. 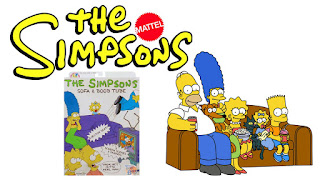 Mattel rounded out the series of figures with The Simpsons Sofa & Boob Tube - The one and only accessory produced to coincide with the series. The piece was fairly basic in production, but worked well with the limited articulation of the figures.

A button on the back of the couch operated an ejection feature, and the TV featured slide in cardboard cards depicting characters such as Krusty the Clown, Sideshow Bob, Itchy and Scratch, The Happy Little Elves. and a scene from the infamous Fight To Knock The Other Guy Out. When no card was in place, the television showcased a colorful background with static lines. The TV also feature wheels on the bottom for rolling it around, as well as antenna on the top that could be rotated around. Much like the figures, the set also came with pre-printed bubble cards that could be placed over the television to mimic sound coming from it. Overall it's not a bad accessory, in fact it's fairly iconic in and of itself to The Simpsons family. 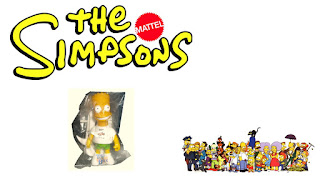 The last item made available in the US is the incredibly rare mail away Bart Simpson with white "Save Blinky" shirt. This figure was produced in 1991, but due to rapidly dwindling sales was not very popular among fans. Though we aren't sure just how many of these figures were redeemed from Mattel, these days they're not easy to come by.

For those of you that are a 100% completest when it comes to your action figure collections, then you definitely want to consider this one prior to diving in. If (and that's a very large IF) you can find one, be ready to drop upwards of a grand on this figure alone. This is absolutely one of the most rarest action figures in existence. 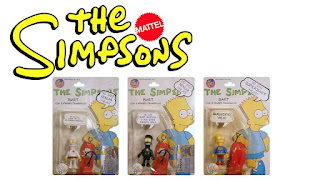 Also along the lines of scarce and rare, there were three additional figures produced and sold strictly in South Africa. All three were renditions of Bart, and feature him in a white ninja outfit, a Superman-type outfit and a black ninja outfit. Though still difficult to find, they are far from as scarce as Blinky Shirt Bart.

Its important to note that while the packages share the similar style to that of the Mattel series, and the mold is definitely that of the Bart Simpson figure above, the packages themselves make no reference to Mattel - Or any toy company for that matter. Couple that with a 1992 release date (well after the Mattel line was distributed in the US), and the question could be argued that these are actually bootlegs. Unfortunately it's never really been confirmed. However, it's also key to note that toy manufacturers were notorious for selling their molds to foreign toy manufacturers in the 80's and 90's once popularity dwindled in the US. With that in mind, it wouldn't be unreasonable to think that this is what happened in this particular case.

For the most part, the basic figures that encompass series one (or rather, the entire series) aren't difficult to come buy. However, finding a seller that is a little more knowledgeable about what the going rate should be is. A lot of sellers price these figures from $35.00 to $60.00 each when in reality most Simpsons fans are more so willing to pay between $5.00 and $15.00 - Depending on the characters. Marge, Lisa and Maggie seem to be the most desired figures, and as such are the high(er) dollar ones to obtain. Still, if you're patient, you can nab them all for a fairly reasonable price.

Then of course there are the mail away and South Africa ones. Those are a whole different story. Like we said above, if you're a completest, then you may want to steer far clear of this series. However, if you're up for the challenge, the thrill of the hunt, and have an exorbitant amount of expendable cash, then this could be the line for you. Just keep in mind that it's going to take more than cash to obtain this entire series. It's going to take patience, persistence, and possibly a collector abroad to help out.

Click "HERE" to go back to the home page. For more posts related to this one, please click the labels below.
Posted by The Toy Box on June 27, 2016
Email ThisBlogThis!Share to TwitterShare to FacebookShare to Pinterest
Labels: 1990's, Matt Groening, Mattel, Playmates Toys, The Simpsons, World of Springfield