Oh, Street Players....How you just didn't understand the toy / collector's market. You get a consistent "A" for effort, but you never quite hit the mark, did you?

From his strange fashion sense, his odd behavior, and his interesting choice of friends, Dennis Rodman certainly has a way of staying relevant in the world of celebrities. Couple that with a man who had an amazing NBA career (so we've heard), and you have what one could classify as an icon in the world of pop culture - Or at the very least a madman who seems to crop up here and there, do something insane, then disappear again for a bit. 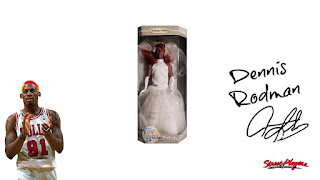 However, with that said, we don't necessarily recall anyone in the world of collectors saying something to the tune of, "Gee, I wish someone would produce a doll of Dennis Rodman dressed in a wedding gown." You know, from the infamous time he announced that he was bisexual, and going to marry himself.

Well, regardless of this lack of desire, Street Players said, "We'll answer the call to the unasked question!"....And then they did. Yes, in 1996 you could own your very own Dennis Rodman Wedding Day twelve inch doll! Everyone rejoice! 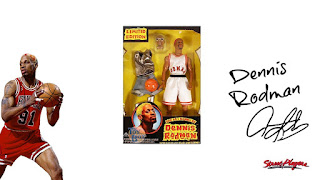 Okay, so you're not into Rodman dressed in drag. We get it. Not many people would be. Street Players still has you covered with the more simplistic standard Dennis Rodman doll. This particular version featured white trunks and a white jersey, as well as basketball....Oh, right...And if you look close enough you'll see shorty short jeans, a silver shirt and knee high silver boots in there too....Because.....Why not.....It's Dennis Rodman...And it's a limited edition at that.

As shocking as this may be to all of you reading, the doll didn't fair too well on retail shelves, and to date doesn't hold much value on secondary markets. Mint in the box dolls sell between $6.00 and $15.00 - Which approximates to about 25% to 50% less than actual retail prices when the doll first came out.

Yes, Dennis Rodman is one quirky dude. For more on his antics, take a look at a list we found entitled, The 15 Most Outrageous Moments In Dennis Rodman History That Remind Us How Crazy He's Always Been.

Click "HERE" to go back to the home page. For more posts related to this one, please click the labels below.
Posted by The Toy Box on June 09, 2016
Email ThisBlogThis!Share to TwitterShare to FacebookShare to Pinterest
Labels: 1990's, Dennis Rodman, Street Players