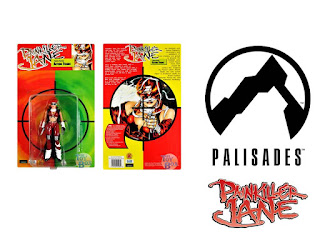 Painkiller Jane isn't the most well known comic book title out there, but it has a strong niche following of fans that have kept it relevant since issue one in 1995.

Created by Joe Quesada and Jimmy Palmiotti, Jane Vasko starts out somewhat like Robocop. She's a police office that gets mortally wounded in the line of duty, only to be revived with superhuman regenerative powers through mysterious means - Okay, maybe not much like Robocop beyond the mortally wounded part. She then leaves the police force, taking on the mantra of vigilante, Painkiller Jane.

Branching out from the pages of comic books, Painkiller Jane even made an appearance in her own made for television movie in 2005 on the Sci Fi Channel. The movie starred Emmanuelle Vaugier as Jane, and would be the backdoor pilot for a television series that would follow. 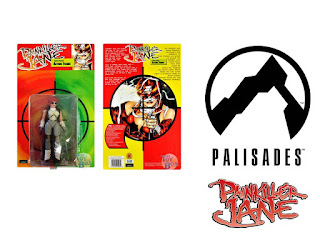 Said show was the 2007 series of the same name. The show starred Kristanna Loken, and ran for 22 episodes before it was unceremoniously cancelled. The series was significantly different from that of the comic book, dropping most of the back story. Interestingly enough though, the story it did follow resembled much closer the original version of the character that Palmiotti and Quesada developed.

Back in its startup days, Palisades procured the rights to produce a series of figures based on Painkiller Jane. The problem - All they produced was the same figure three times. No other characters were brought into the fold. To make matters worse, all three were produced in limited quantities, making them difficult to obtain. 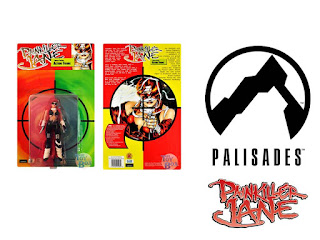 That was of course back in 1998. Fast forward to 2016, and while the figure isn't flooding secondary markets, it's relatively easy to find all three versions - Its relatively cheap too. All three variants are typically priced between $5.00 and $10.00 on the card. Sadly, even then they don't sell most of the time.

Click "HERE" to go back to the home page. For more posts related to this one, please click the labels below.
Posted by The Toy Box on April 14, 2016
Email ThisBlogThis!Share to TwitterShare to FacebookShare to Pinterest
Labels: 1990's, Dynamite Entertainment, Event Comics, Jimmy Palmiotti, Joe Quesada, Painkiller Jane, Palisades