The Hitman series of games revolves around the character, Agent 47 - A cloned assassin for hire. The series has had a strong foothold in the market for publishers Eidios Interactive and Square Enix, with games coming out fairly regularly since 2000. As of 2016, the series will have it's ninth installment.

Agent 47 has even gone on to be the focal point of a Hitman movie which hit theaters in 2007. Unlike the games however, the movie was met with poor critical reception. So much to the point that not only was the planned sequel cancelled, but so to was the potential reboot.

As part of its Player Select line, NECA produced two versions of Agent 47. The first in a black suit, and the second in a white suit. Granted, the figures are the exact same molds as each other, just with different paint jobs. 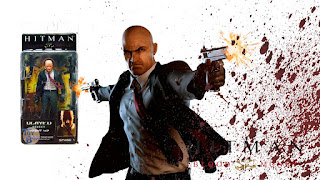 One of the most exciting things about these figures (for us) is the vast amounts of accessories. The guns have a massive amount of interchangeable parts, such as scopes and suppressors. These bits and pieces mean that each Hitman figure can still look unique despite being the same mold. 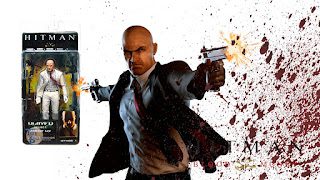 Hunting these figures down these days is no cheap task. The black suit version of Agent 47 sells for between $30.00 and $50.00. The white suit version is definitely the more rarer of the two, and its value reflects it as such. Prices can reach as high as $80.00 for that particular version.

Click "HERE" to go back to the home page. For more posts related to this one, please click the labels below.
Posted by The Toy Box on April 25, 2016
Email ThisBlogThis!Share to TwitterShare to FacebookShare to Pinterest
Labels: 2000's, Agent 47, Eidios Interactive, Hitman, Hitman Blood Money, NECA, Player Select, Square Enix