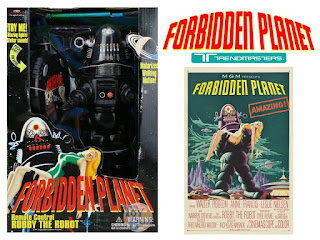 There have been a ton of toys based on Robby the Robot from the 1956 film, Forbidden Planet. Unfortunately a fair amount of them have been bootleg knockoffs. Be them Japanese / Chinese knock offs sold by local street vendors. Or grocery store toy isle fodder with names a simplistic as "Robot". It seems everyone wants to cash in on the iconic character.

Fortunately for the franchise rights owners, not every toy distributor simply wants to use the likeness of their robot. In 1998, Trendmasters produced the one off, Remote Control Robby the Robot.

Robby featured a motorized walking feature as well as lights and sounds. Pretty much the only downer to this thing was that the distance he could walk was limited to how closely you wanted to follow him - Probably on your knees no less. The bot was tethered to the remote via the wire that sent the signal from the control to the toy, and not a long wire at that - Thus why most adults would be on their knees with it. Overall though, not a bad representation of the character.

Prices vary drastically depending on condition of the box / robot. We've seen prices as low as $65.00 (still not cheap), and as high as $150.00 (definitely not cheap). Then there was the one lucky guy that won one off of ebay for an astonishing $11.38 - Not only a great value (for the buyer), but a win for the unintentional Lucasfilm reference. Either way, that's probably one happy buyer.

Click "HERE" to go back to the home page. For more posts related to this one, please click the labels below.
Posted by The Toy Box on April 28, 2016
Email ThisBlogThis!Share to TwitterShare to FacebookShare to Pinterest
Labels: 1990's, Forbidden Planet, Robby The Robot, Trendmasters