One of the most anticipated waves of toys for 2014 has finally started hitting store shelves...Which is odd, because we had it on good faith from Paula Billingsley of Playmates Toys who said, quote;

"All the new TMNT Figures and TMNT products are being distributed to the retail stores around the first part of July or August which is the Spring release. Any older figures will also be coming back out in limited amounts."

Apparently someone at Playmates Toys didn't get the memo.

Regardless of what happened, fans of Nickelodeon's Teenage Mutant Ninja Turtles can rejoice in the fact that new products have finally started hitting retail. 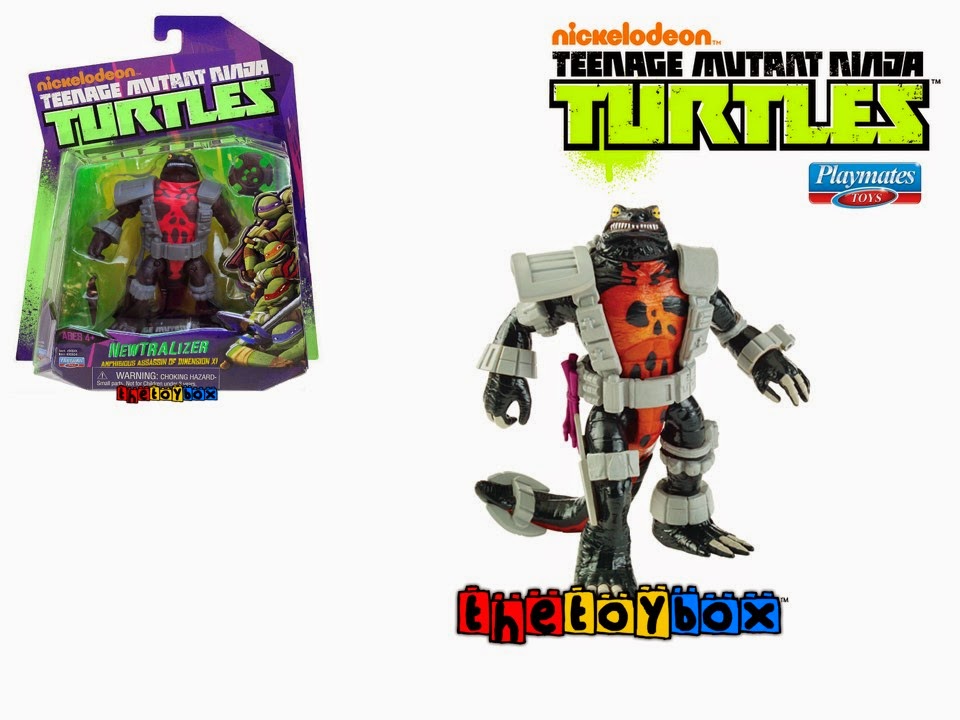 The four new figures are; Newtralizer, Slash, Rahzar and Dojo Splinter. Though it was initially specualted that Tiger Claw would be available with this wave, it appears that this figure has been held back for a later release.

Each figure comes packed on the traditional TMNT packaging which has been in place since the first series. It still contains each figures unique file card, and though the figures at the bottom have been updated to show everything available to date, there's nothing new going on for it. At this point, the packaging has kind of run its course for us, and we really wish that Playmates marketing team would come up with something new, fresh and a little more exciting. 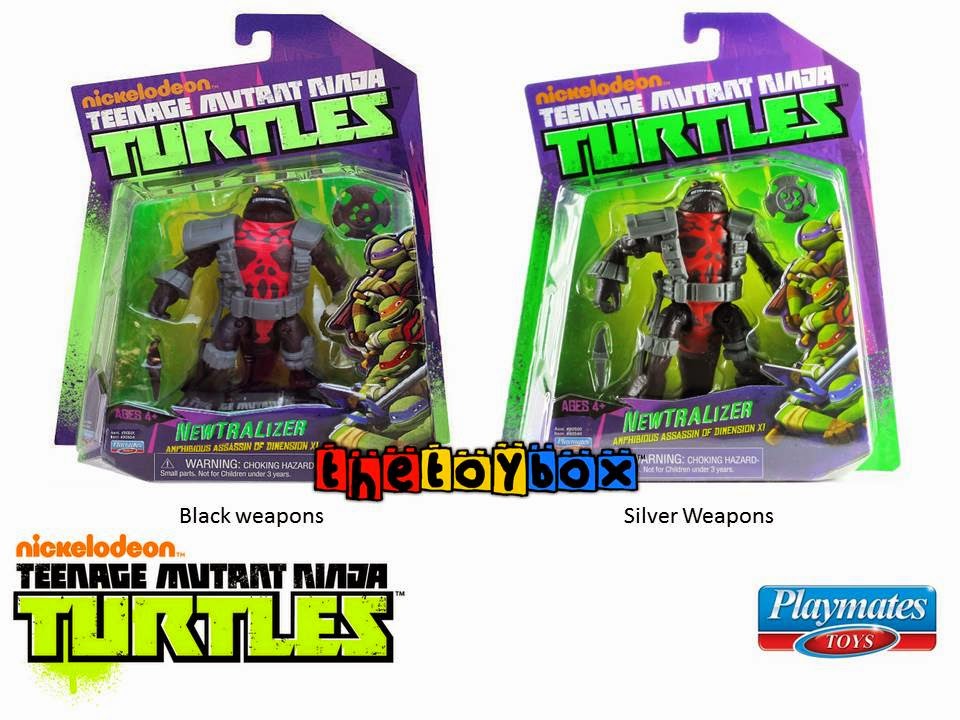 Variants are quickly becoming a staple in the series, and this particular wave of figures seems to be no exception.

Newtralizer can be found with both black and silver weapons. Though there appears to be no physical changes to the figure inside.

It appears that these variants are determined by which factory they come from as it's nothing more than pant differences as opposed to sculpt differences. As such, for most of the variants you really have to have a sharp set of eyes for spotting them. 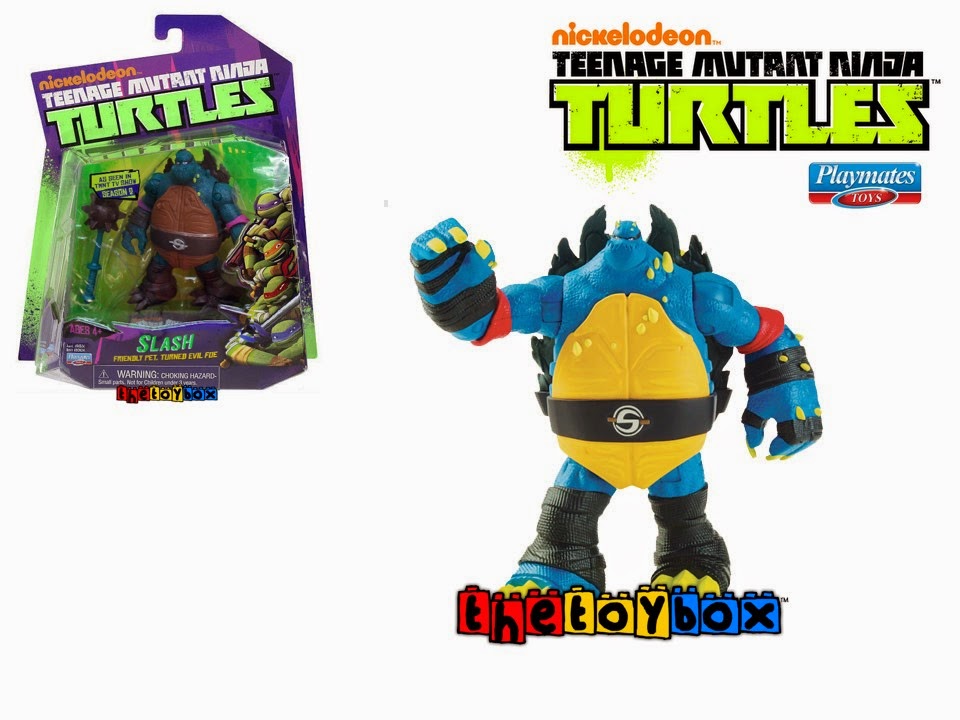 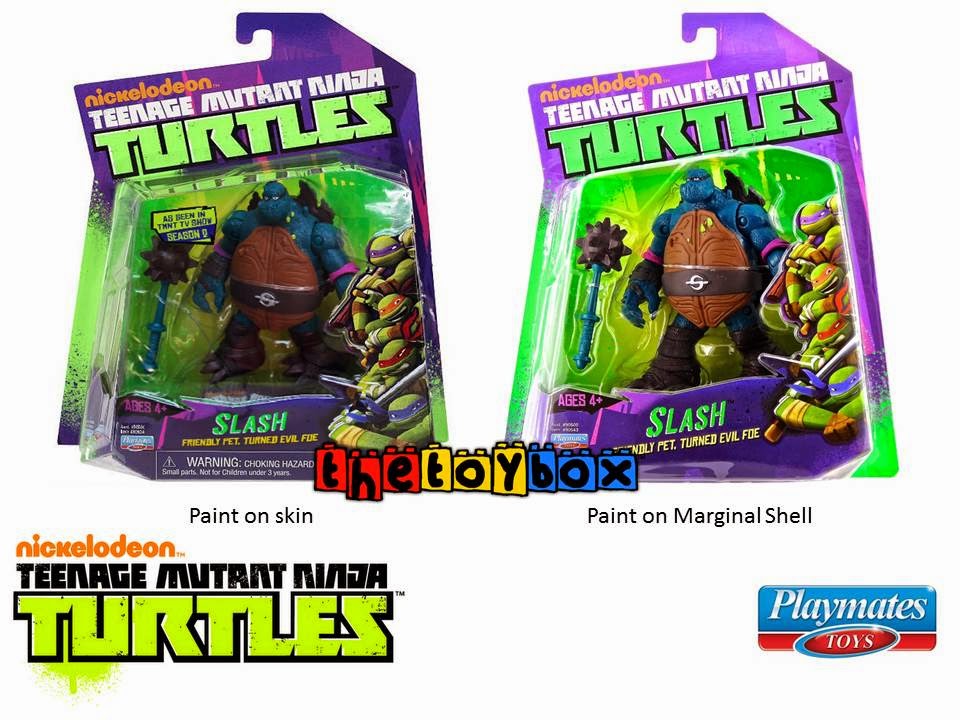 ***UPDATE***Playmates Toys is at it again with production changes/variants. It has been brought to our attention that Slash is available in two versions. The first has the ooze splatter on his neck and shoulder, I.E. his skin. The second has the ooze splatter on his marginal shell, I.E. his chest. Variant hunters rejoice? Check out the side by side comparison photos on the left for further information.We'd like to thank the reader who brought this to our attention, unfortunately they chose to remain anonymous in the comment section. 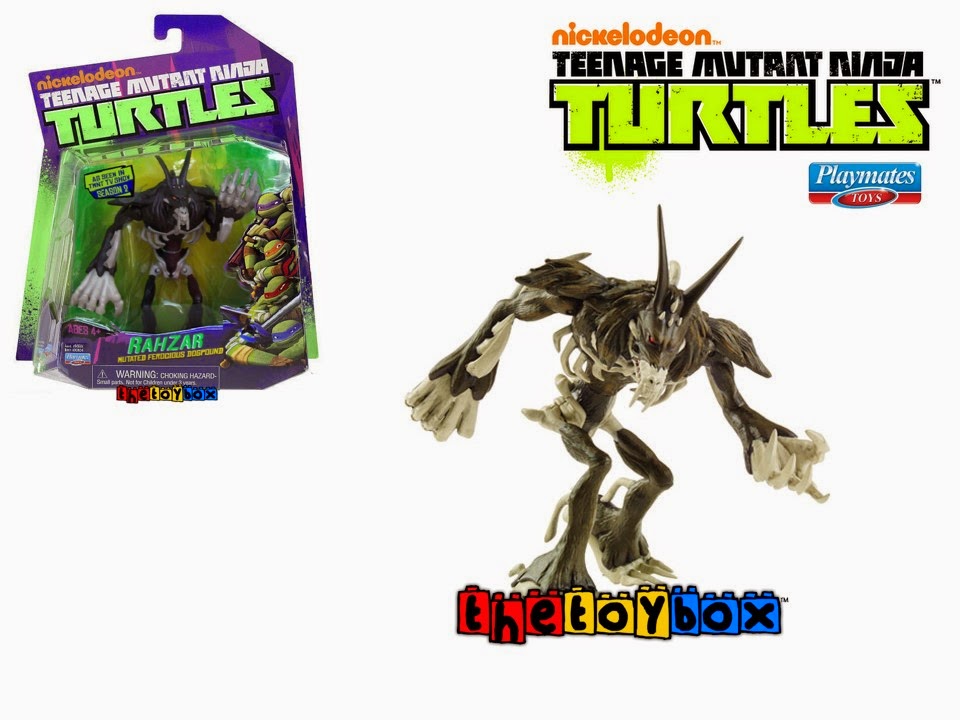 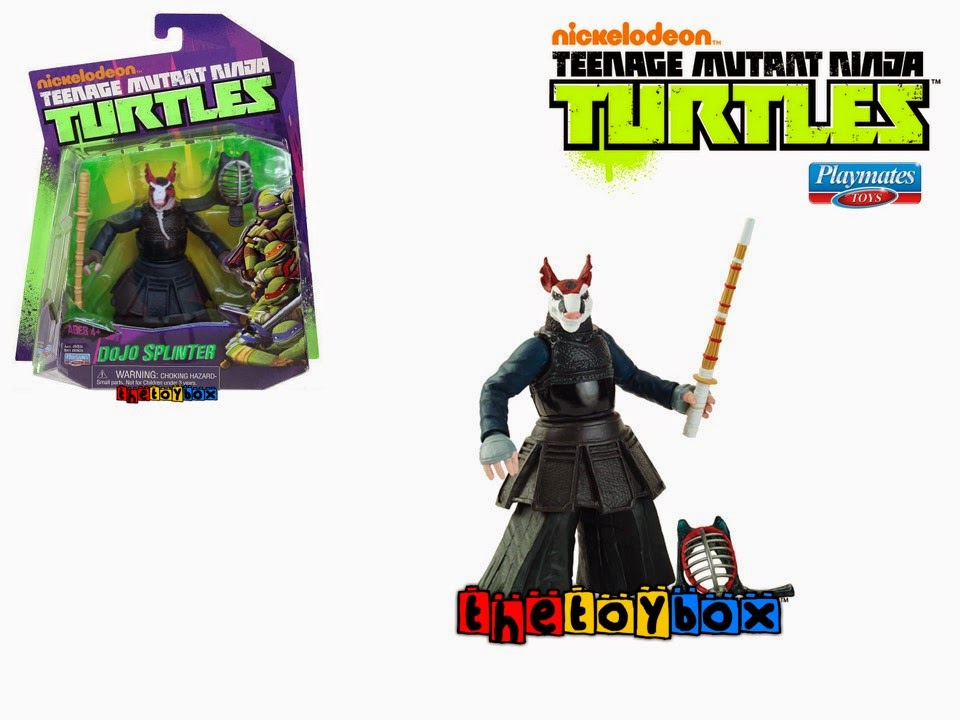 An all new sub series has also made its way to store shelves as of July, 2014. These all new figures based on the season two episode "Mazes and Mutants" feature the four turtles geared up in their LARP (Live Action Role Playing) costumes. Available are; Leo the Knight, Mikey the Elf, Donnie the Wizard and Raph the Barbarian. 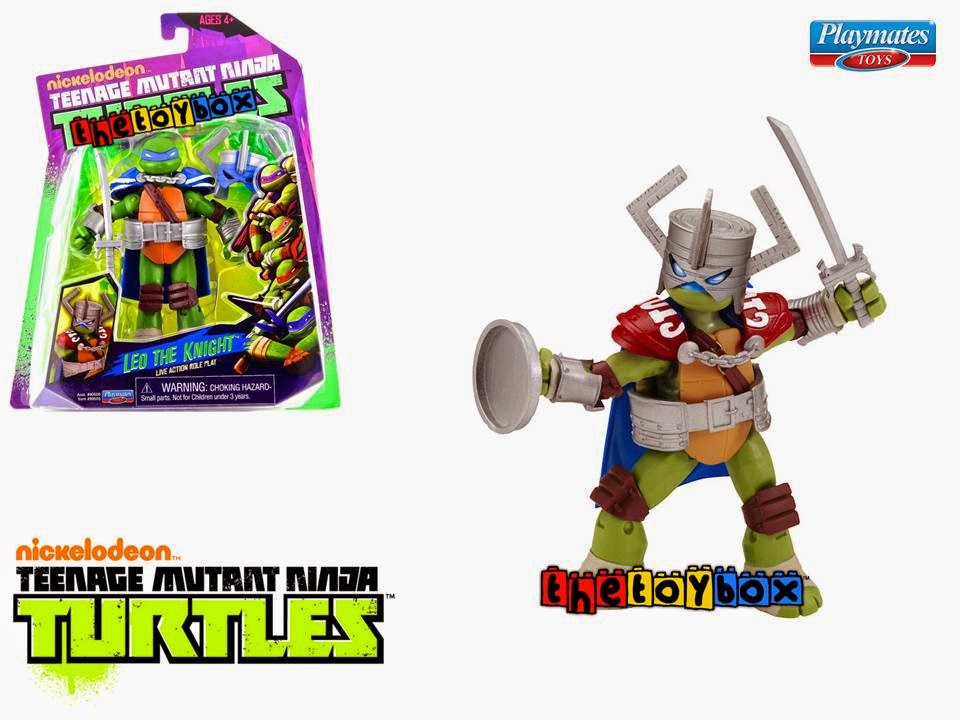 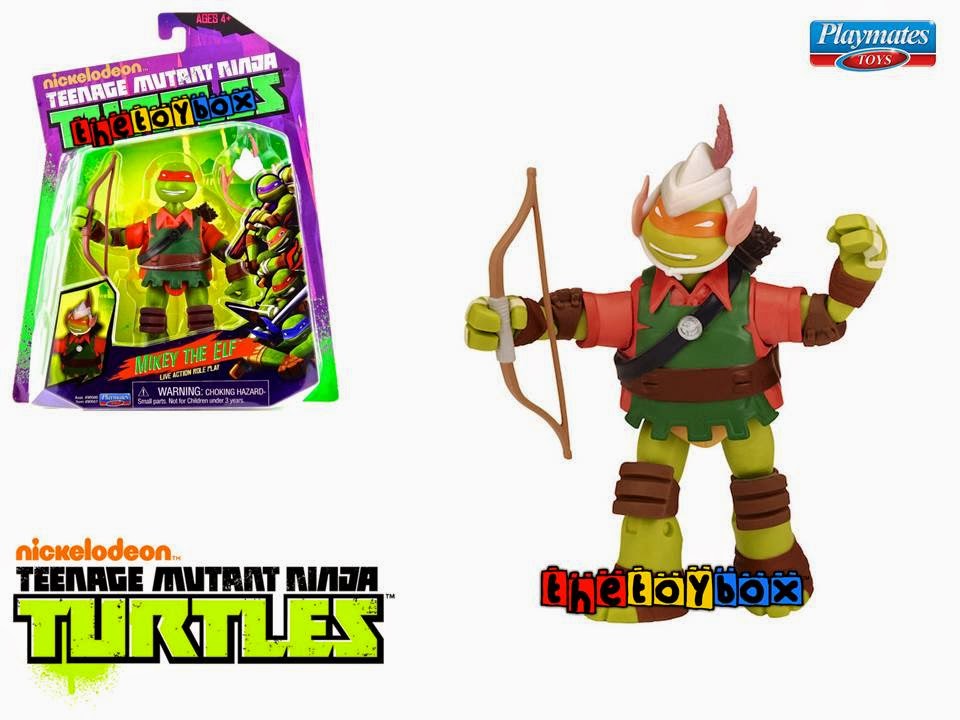 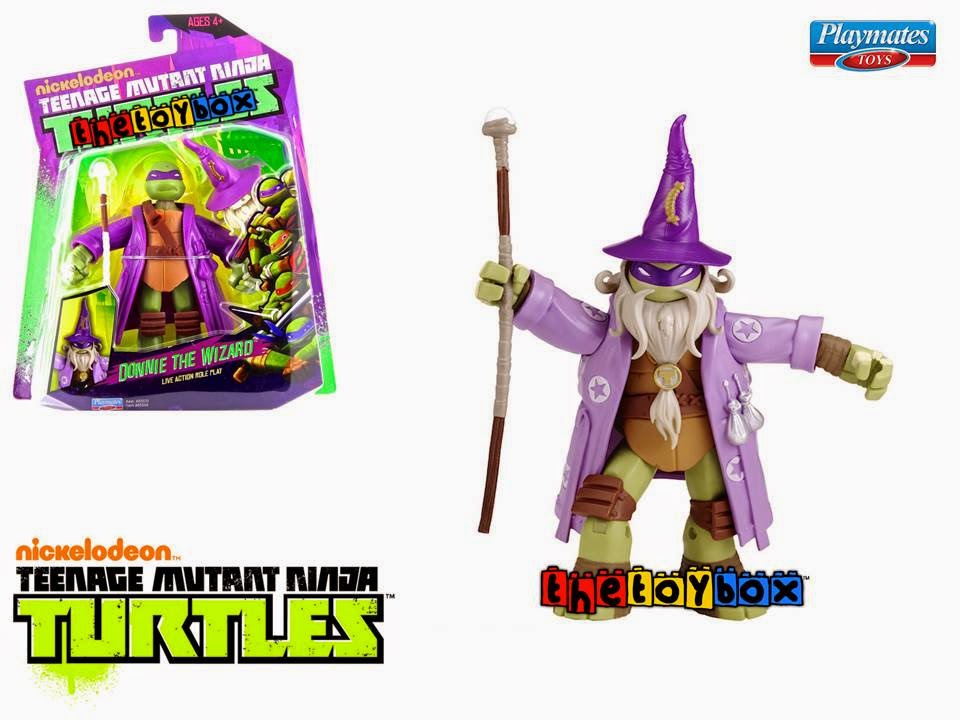 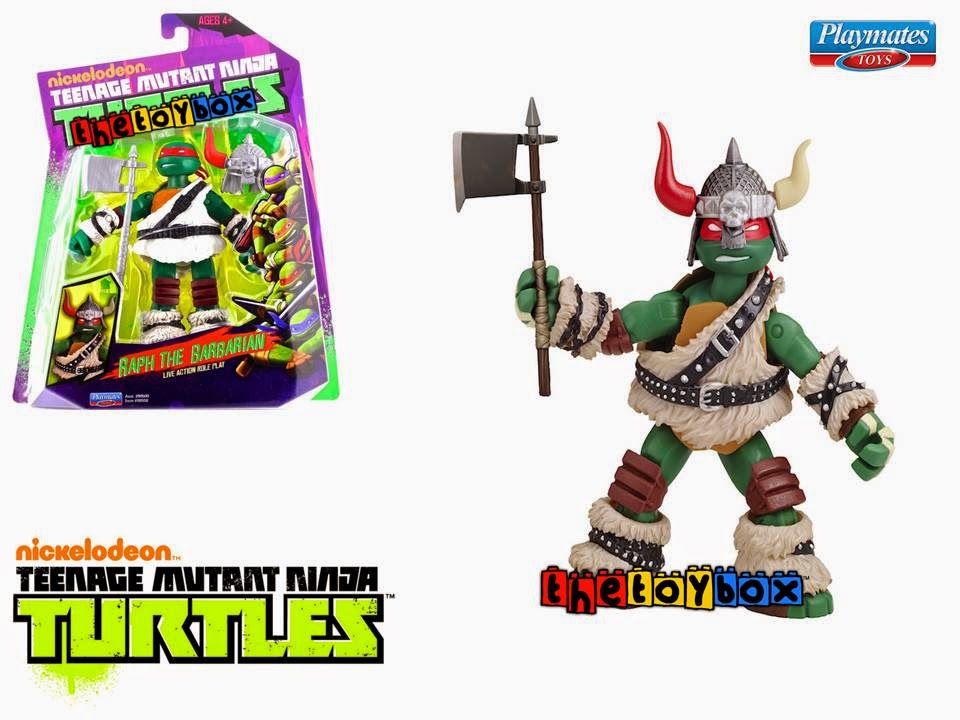 We found all four of the LARP figures (Leo the Knight, Mikey the Elf, Donnie the Wizard and Raph the Barbarian) at our local Walmart - Which was shocking to say the least. What was odd is that they had two of each with the exception of Raphael, which there were four of. All the pegs were stuffed, so it wasn't like anyone had gotten any of the others already.

Word to the wise - Aesthetically, these figures look great. Quality wise, they're some of the worst figures we've seen to date. In fact, it seems like the quality of the series as a whole seems to be dropping more and more with each wave.

As we said in our Series 7 post, the Shell Flyer was being advertised from the get go, but wouldn't be available until 2014. While the vehicle still hasn't hit store shelves yet, it's anticipated to soon.

We've started seeing the Shell Flyer on ebay and Amazon, but the sellers are either from Hong Kong or the UK. As such, we're not banking on the items being legit releases. 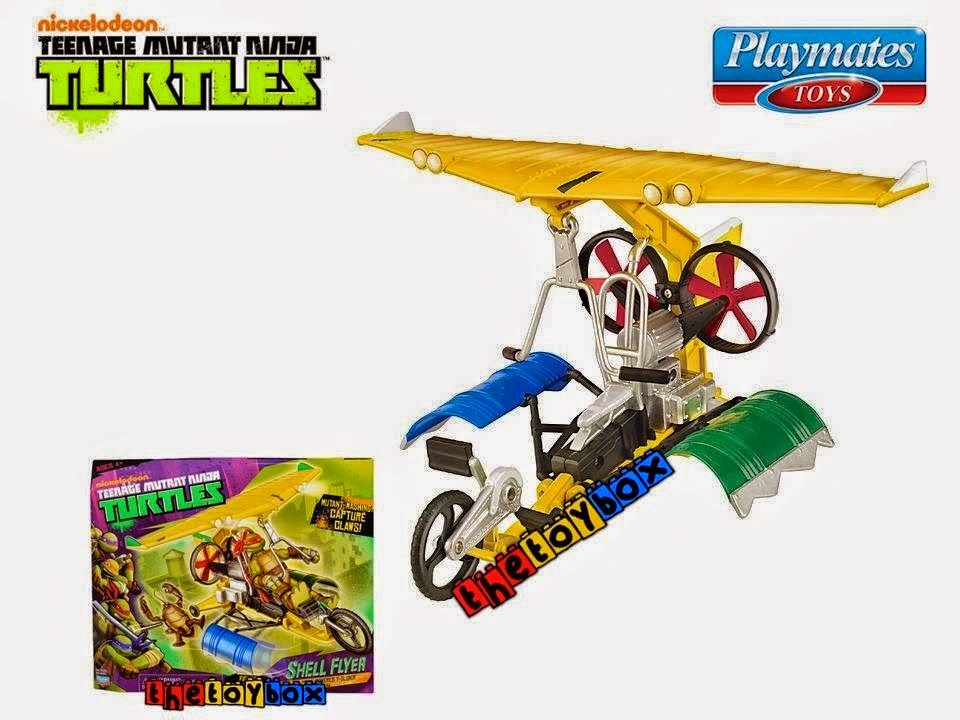 For those of you who missed the two packs of buggies which were released last year, Playmates has repackaged them individually, and has re-released them. Each Turtle's buggy is availabe, and at the average cost of $9.99, you can actually get them slightly cheaper than what the two packs initially cost. Available are; 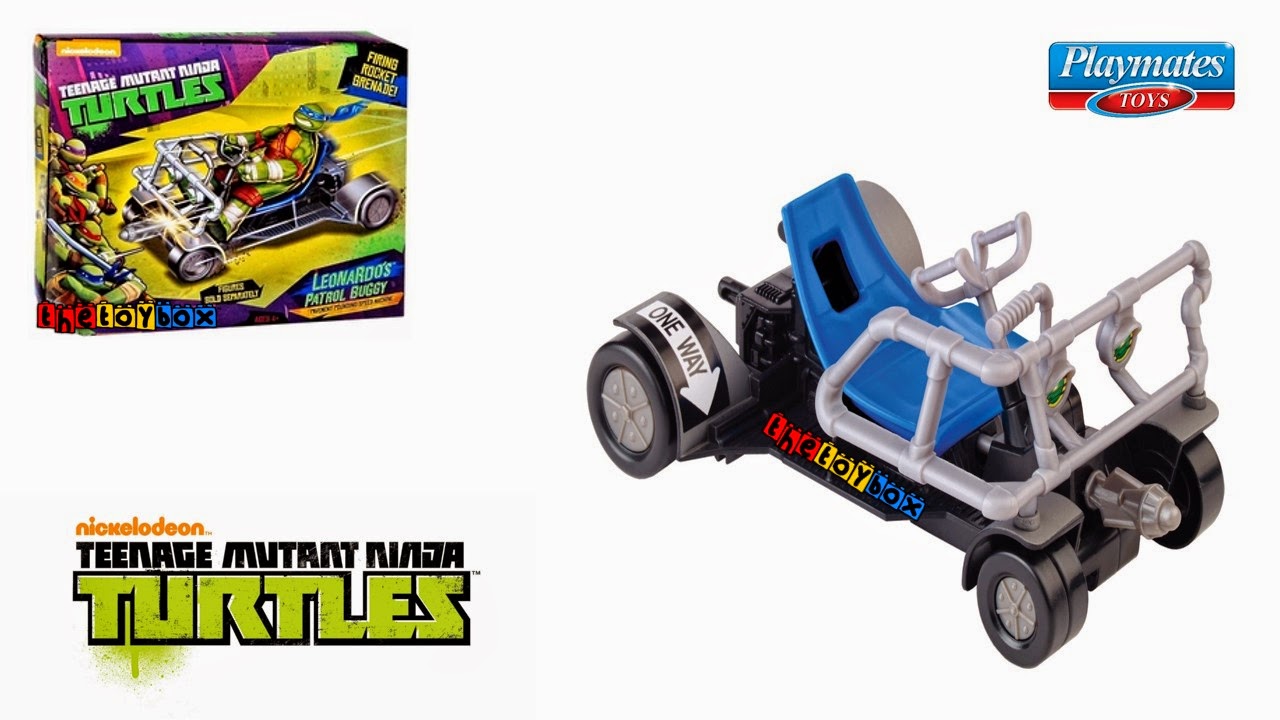 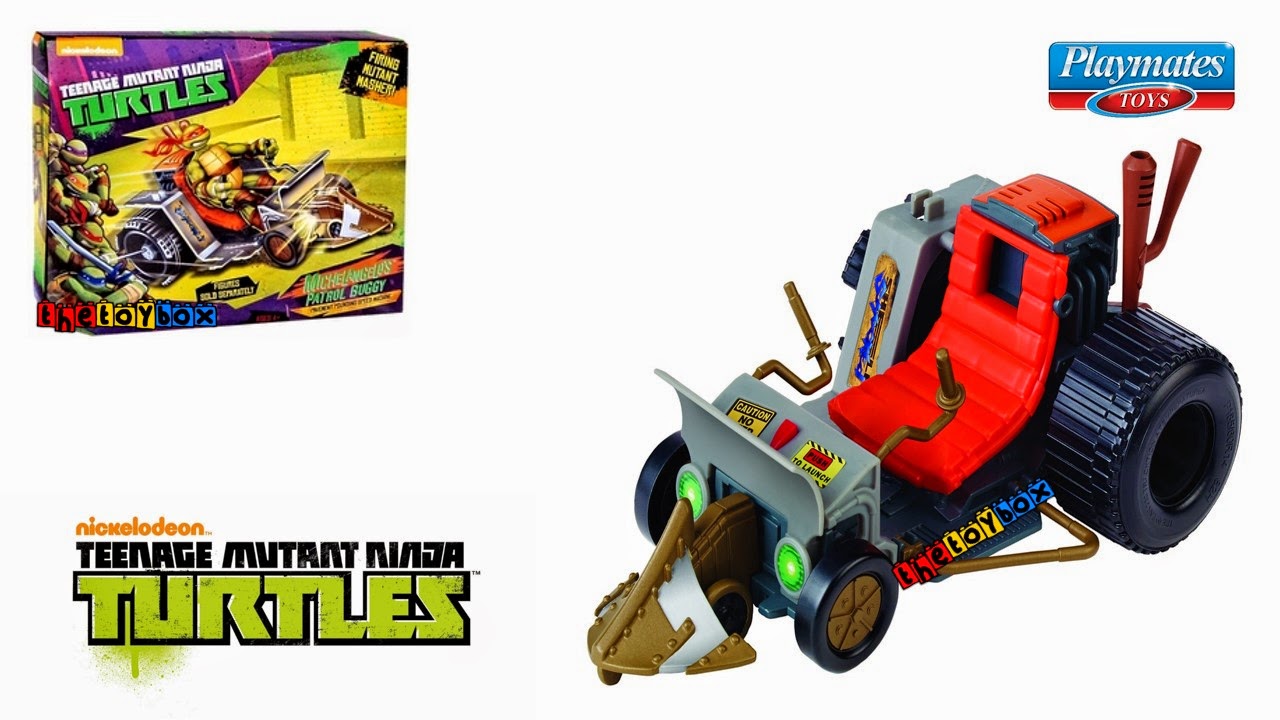 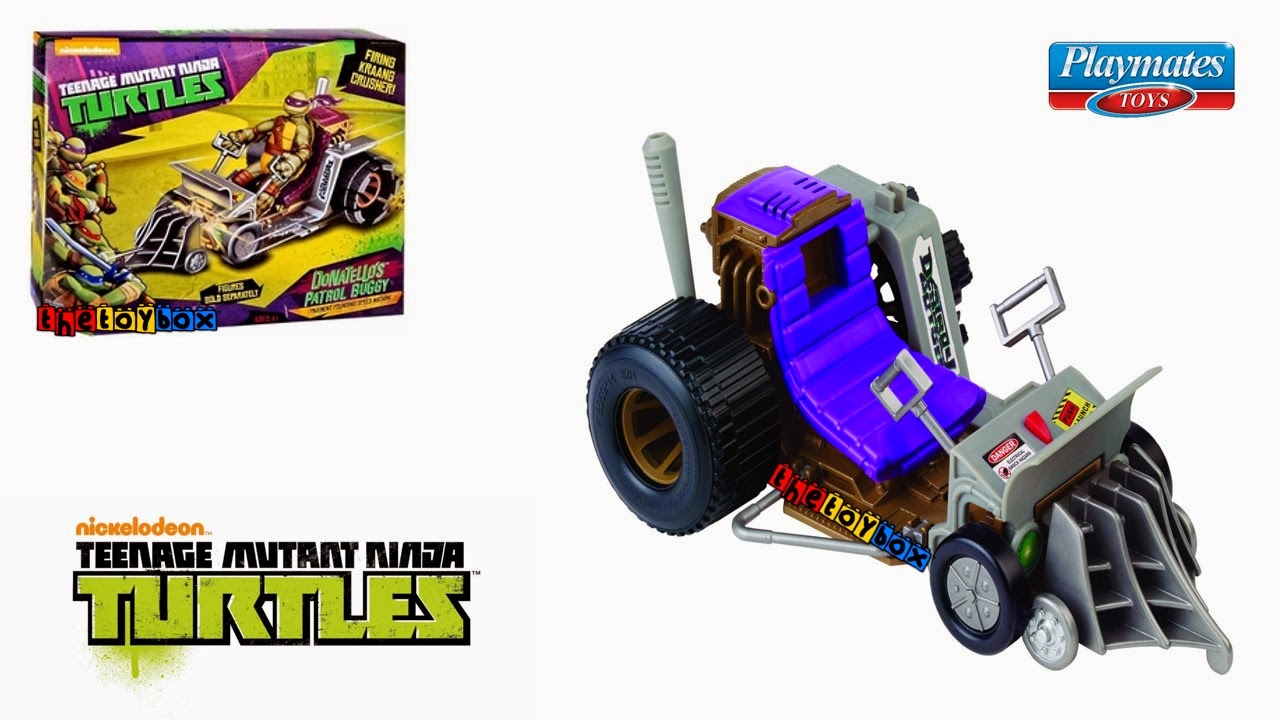 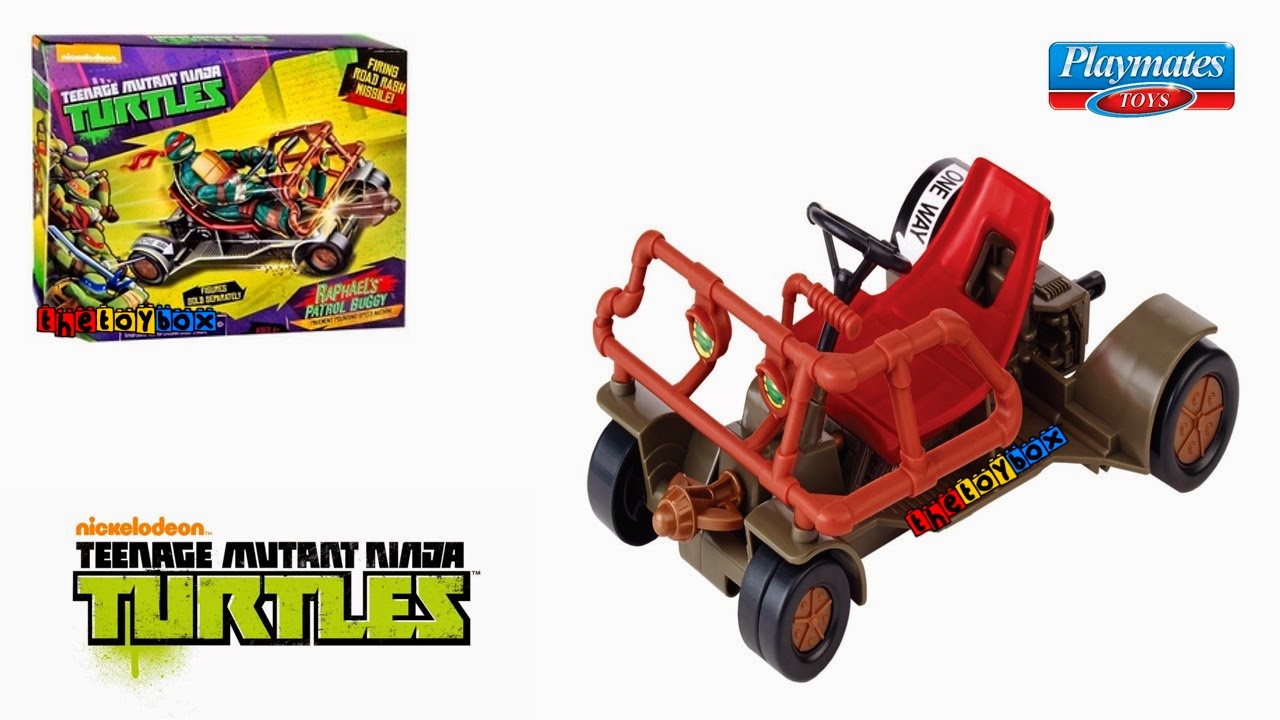 Unless you're a sealed on card (or in box) collector, then these really aren't a necessary purchase for those who already have them.

Also coming soon is the High Flyin' Blimp. While we haven't seen this vehicle in any of the Nickelodeon animated series episodes, the Turtle Blimp is an iconic vehicle which harkens back to the original line from the 80's, and is sure to be a fan favorite. 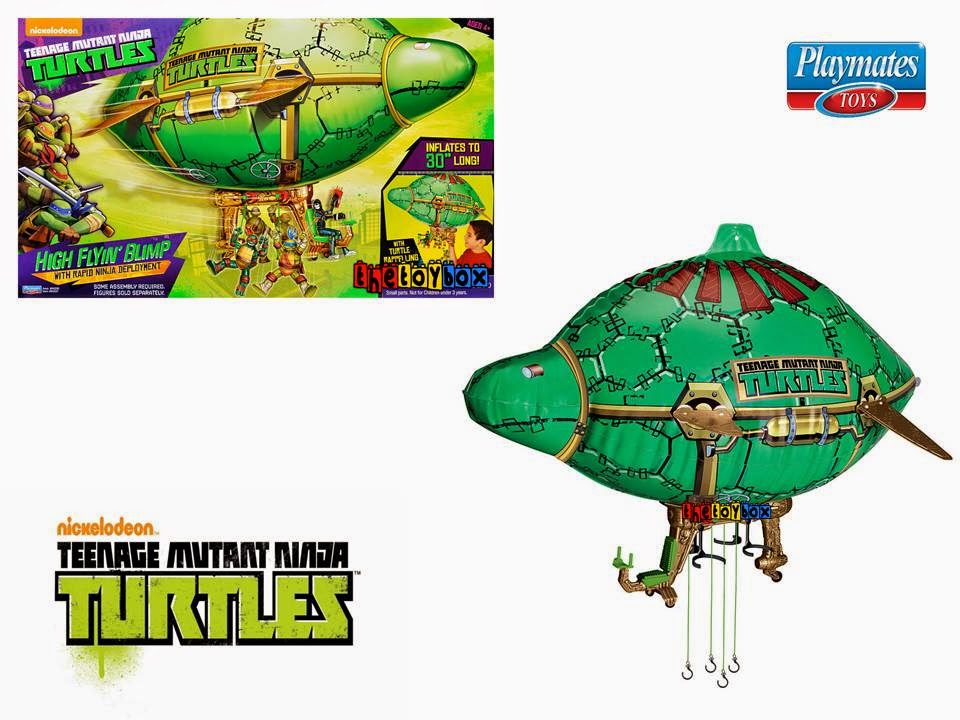 No, you won't find any of the above in abundence just yet, but the items are trickling in here and there. As always, we recommend the patience and thrill of the hunt as opposed to the instant and expensive gratification of sites such as eBay.

The buggies are also available, but are priced at $13.99. Ouch! Unless you absolutely have to have them, we recommend waiting for retail stores to stock them, and save yourself sixteen dollars in the long run (plus shipping). The vehicles have always been in more abundence than the figures. 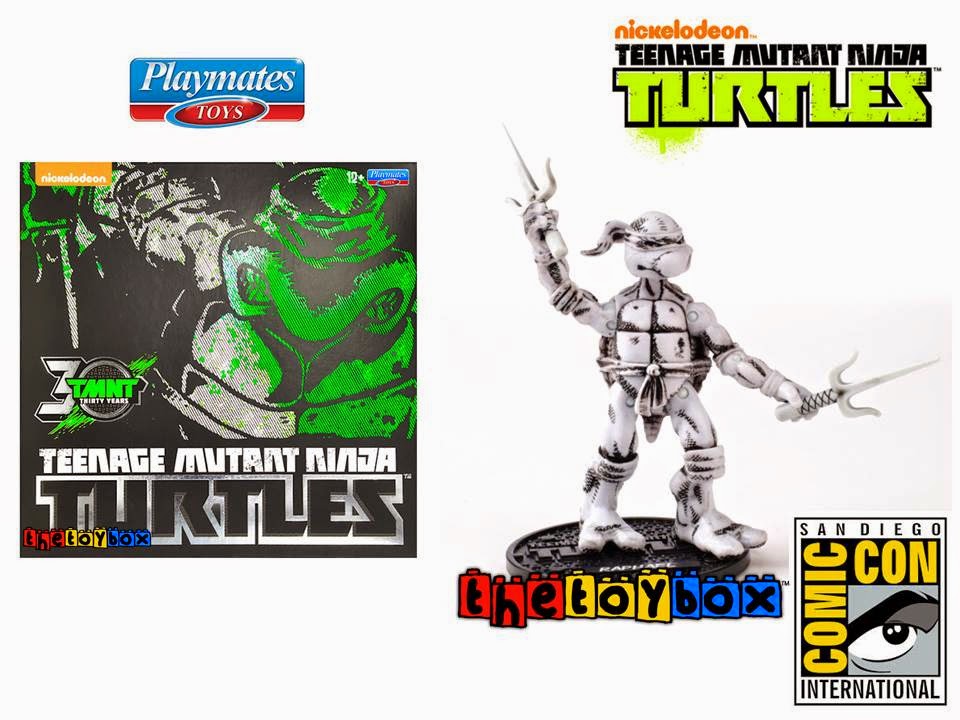 Playmates Toys has also announced that this year's exclusive at San Diego Comic Con will be a black and white comic book version of Raphael. This has intrigued many collectors who wonder if a Mirage Comics accurate line of toys is in the works, or if this is just a one of a kind figure that won't see any further releases.

Hopefully it's not the latter as fans of TMNT have long since desired comic accurate versions, and with NECA's failed attempt it would be great to see this actually happen the right way. If anyone can do it, it's certainly Playmates Toys.

Playmates Toys confirmed at this year's SDCC that they are indeed working on a line of figures based on the comic book iterations of the characters. For now, the only figures planned are based on the four Turtles. Hopefully more will follow.

On a side note, it's rumored that the images below are official pics of what Beebop and Rocksteady will look like in upcoming episodes. The images were apparently from Playmates Toys website, but removed shortly after being posted. Rumor or truth? Time will tell. 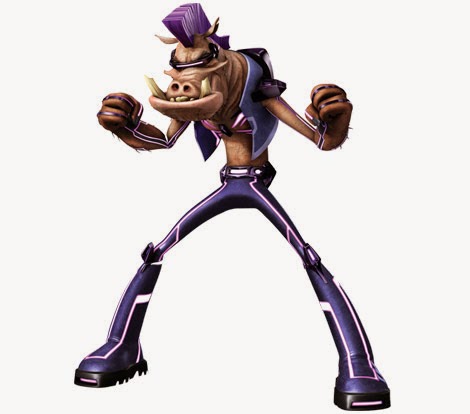 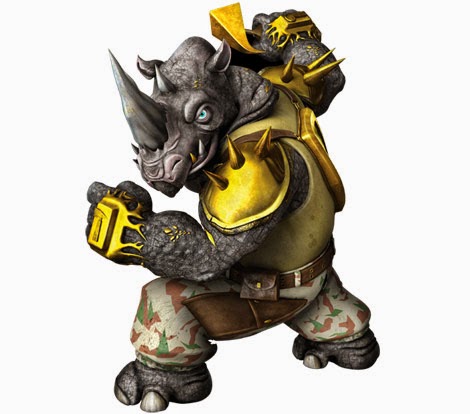