Darkstalkers, or Hepburn: Vanpaia to our Japanese friends, is a 2D fighting game that has made considerable headway with fight game fans across the United States. The series is released by Capcom, a company well known for putting out this particular genre of game, with the Street Fighter series being their most popular, and since its first incarnation in 1994 has seen numerous sequels as well as other crossover games the characters have been incorporated into - Such as the Marvel Vs. Capcom games.

The series is set in a pastiche Gothic horror universe and features a cartoonish graphic style. The characters range from various monsters to hunters of the said monsters. Each character has a unique fighting style and move list. 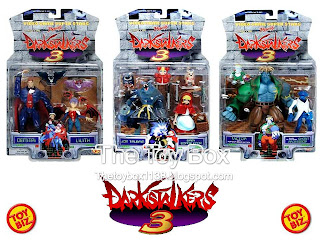 Though the third game was released in 1997, it was so well received that in 1999 Toy Biz produced a small series of figures based on the characters. Two figures came in each package, and were released under the banner "Video Game Super Stars" - An already established line from the company.

A total of six figures were released, which paled in comparison to the 20 characters that appear in the actual game. Be it poor sales or lack of product support from the manufacturer, the line never seemed to find a strong foothold on the market, and many retail chains were forced to move it to the clearance isles.

Unlike other figures in the Video Game Super Stars line, Darkstalkers 3 figures don't do all that well on the secondary market. One two pack can be found for as little as $10.00, with entire sets selling for as little as $25.00.

Despite its failure in the toy isle, Darkstalkers is still a solid franchise for Capcom, with games still in production. The series has even spawned an animated series, an anime miniseries, and Manga comic books. While it may not be the toy of choice, it's clearly a fan favorite in other genres.

Join us next time when we take a look at Rocky!

Click "HERE" to go back to the home page. For more posts related to this one, please click the labels below.
Posted by The Toy Box on December 27, 2012
Email ThisBlogThis!Share to TwitterShare to FacebookShare to Pinterest
Labels: 1990's, Capcom, Darkstalkers, Darkstalkers 3, Toy Biz, Video Game Super Stars, Video Game Toys