The Year Without A Santa Claus (Neca)

Out of respect for our brothers and sisters around the world who don't celebrate the Christmas holiday, we've decided that we will not shove a bunch of holiday related toys down your throat this December (with the exception of our daily Advent Calendar toy). Thus, we present the small line, The Year Without A Santa Claus as our way of saying that this will be our year without Santa on our site. This will be the only Christmas themed line we will be bringing you this month.

Once again we turn to Neca, who has been getting a lot of attention from us these past few weeks, for a look at their 2006 line based off of the 1974 Rankin/Bass stop motion animated television special. In the show, Santa is told by his doctor that people don't care about Christmas anymore, and that he should change up his routines. With that in mind, Santa decides to take a break. Jingle and Jangle, two of Santa's elves, are left with the task of finding people who still believe in him.

The two opposite forces of nature, Heat Miser and his stepbrother Snow Miser play a role in the special as they battle against each other for dominance of the weather. The two characters have become the most well known Rankin/Bass characters, and this is present in the toy line from Neca where they are essentially the main focus.

The two individual characters were released on card, and would be the only figures released this way. 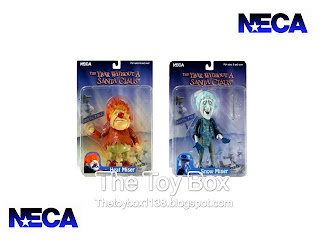 Coinciding with the individually carded figures were the two box sets which each contained three figures. 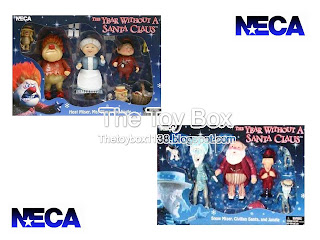 Neca would also go on to produce a line of figures based on the special, though in most respects the figures are really no different from the Neca versions. For fans of the show, we can see the nostalgic value that these figures would hold for them.

With that said, we wish all of you a happy holiday (if you celebrate this time of year).

Join us next time when we take a look at Cult Classics Presents: Reservoir Dogs!

Click "HERE" to go back to the home page. For more posts related to this one, please click the labels below.
Posted by The Toy Box on December 03, 2012
Email ThisBlogThis!Share to TwitterShare to FacebookShare to Pinterest
Labels: 2000's, Heat Miser, NECA, Rankin/Bass Productions, Snow Miser, The Year Without A Santa Claus