With the success of Tiny Toon Adventures and Animaniacs in the early 1990's, Steven Spielberg tried his hand at yet another animated series; Toonsylvania. The show was not as successful as its predecessors, but managed to eek out two seasons, the first being shown on Saturday mornings typically during the "The No Yell Motel" block, and the second being aired on Tuesday afternoons. In total, there were only 19 episodes.

A typical episode for season one was split up into several segments. The first revolved around Dr. Vic Frankenstein, his assistant Igor, and Phil, their dim-witted Frankenstein monster. The second segment was more of an interlude which featured Igor and Phil on a couch trying to fix a TV remote. In every segment a new problem would ensue with said remote, and was a running gag akin to the couch gag on The Simpsons. The third segment was entitled "Night of the Living Fred," which was about a family of zombies. However this segment was sometimes replaced with parody versions of classic b-movie horror flicks. This was followed by "Igor's Science Minute" which involved the character Igor doing some form of science experiment which would end in disaster, and finally "Melissa Screetch's Morbid Morals". This sketch involved Phil doing something bad, and Igor teaching him a moral lesson by regaling a tale involving a bratty girl named Melissa Screetch.

When season two aired, the show was changed to a more sitcom motif with Igor, Dr. Vic and Phil interacting with a variety of new characters. The only other segment to appear sporadically during the final season was "The Melissa Screetch Show". Now instead of being a moral lesson for Phil, the segment revolved around Melissa hiding under her covers, pretending to be the host of her own show when she was upset with someone. Each segment involved the party she was upset with being a guest on her show, and her doing away with them in some manner. 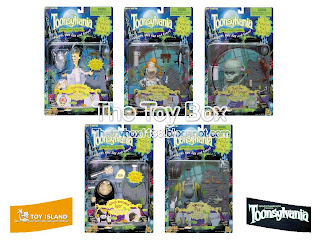 Anticipating the series to be as big a hit as Spielberg's prior animated shows, Toy Island was brought in to help promote the series with a line of toys. However, when the show promptly failed, so too did the toy line, and it was cancelled.

Unlike the show itself, the figures weren't too bad. The characters were strange enough to draw attention to the toys, even if one had never heard of or didn't watch the show, and came packaged in eye catching blue packages with green and yellow labels scattered about the front. Each figure also included an impressive amount of accessories to accompany them as well as piece that doubled as a stand. 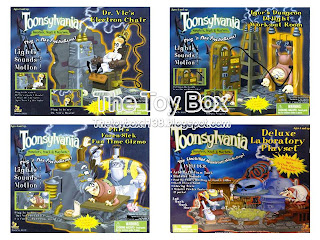 Along with the five figures produced there were also four playsets. Though each playset was small in nature, they could be shifted to combine together to make a single large one.

A small subset of wind up toys was also produced by Toy Island, but many collectors don't feel they incorporate into the series due to their design and overall quality when compared to the "regular" line.

All and all these figures and playsets are incredibly easy to come by on secondary markets, and they go for real cheap too. A typical figure will set you back about five bucks, while a playset will go for around fifteen. Mind you, these prices are for mint in package, sealed toys.

Join us next time when we take a look at Alpha Flight!