Hanna-Barbera, named for the two founders William Hanna and Joseph Barbera (along with George Sidney) was formed in 1957 after Metro-Goldwyn-Mayer (MGM) shut down its animation department, where the two had worked. The two had already found great success (both solo and as a partnership) in the world of cartoons on such entities as Tom and Jerry, Harman-Ising Happy Harmonies,Captain and the Kids, and Cubby Bear and Rainbow Parades (just to name a few), so it was only natural that they would form their own company when the opportunity presented itself.

Under the newly formed company, the duo went on to find even greater success with shows such as; The Huckleberry Hound Show, The Quick Draw McGraw Show, The Flintstones, The Yogi Bear Show, Top Cat, The Jetsons, Jonny Quest, Space Ghost, Wacky Races, Scooby-Doo, Where Are You?, and The Smurfs (just to name a few). Over the course of their careers, they have won several Oscars and Emmys, and been nominated for countless more awards. Both were even given stars on the Hollywood Walk of Fame in the 1980's.

In 1991 Turner Broadcasting Company purchased Hanna-Barbera (the company), and used its catalog of shows to launch their new network - Cartoon Network. Under the company name, new shows were created such as; Dexter's Laboratory, Johnny Bravo, Cow and Chicken, I Am Weasel and The Powerpuff Girls, and have gone on to have the iconic status of the companies original shows for a whole new generation of fans.

Sadly the duo are no longer with us. William Hanna passed away at the age of 90 on March 22, 2001 from throat cancer. His partner, Joseph Barbera passed away at age 95 on December 18, 2006 from what was deemed "Natural Causes". The company has since been merged with Time Warner since the loss of these animation geniuses.

Between 2006 and 2007, McFarlane Toys tipped their collective hat(s) to some of the fantastic characters that the duo had stamped their names on by producing a small series of toys entitled Hanna-Barbera. Though only two series were produced, they encompass a vast majority of the careers of William Hanna and Joseph Barbera.

The sculpts capture the look and feel of each character perfectly, including common facial expressions as seen in the shows. Our personal favorite is the Fred Flintstone/Dino two pack from series two. This figure (for lack of a better word) is perfect.

The first series included five figures, and one deluxe figure and vehicle pack. To say the series was "Fred Flintstone and Tom and Jerry Oriented" would be an understatement. McFarlane Toys was definitely using these three characters as the main driving point for the series.

Each figure (with the exception of the deluxe vehicle and figure box set) came packaged in a PVC bubble package with a unique side bar photo and title card. Even different versions of the same characters were given unique packaging such as seen in the two different Tom and Jerry packs that were released. Each figure also came packed with a background piece that doubled as a figure stand. 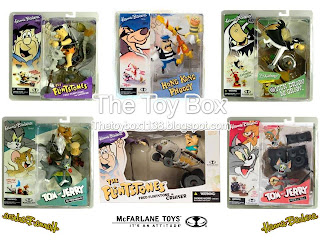 
Series two was slightly larger than the first series, and included seven figures and another deluxe box set. What’s nice about both series one and two are the inclusion of the words "Series 1" and "Series 2" on the packaging to help distinguish them for buyers. This is something that we wish more toy companies would do. 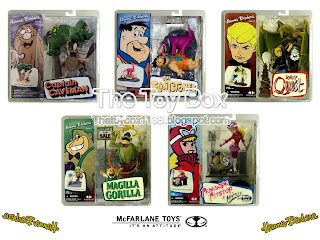 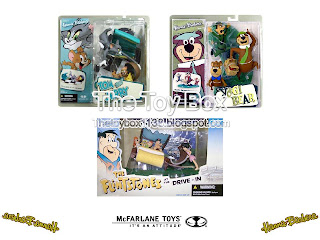 
A third series was announced in 2007, and cancelled shortly afterwards. This set would have included some amazing figures such as; Twinkle Toes Fred Flintstone, The Great Grape Ape, Huckleberry Hound, The Jetsons, Secret Squirrel, Snagglepuss, and The Flintstones Boxed Set - Quittin Time. Each figure would have retailed for $14.99, while the box set of the Flintstones would have retailed for $29.99. It's a real shame these figures were never released, though prototypes are known to exist.

For the most part, the figures on the secondary market fetch around retail prices still today, though you can occasionally get a few of them for less. There are a few that go for slightly over $20.00 each, but not many.

This is absolutely a great toy line for cartoon fans, or fans of the individual characters. It's not a series that feels incomplete if you don't buy every single piece, so that can be beneficial to those looking to pick up just their favorites.

Join us next time when we take a look at Star Wars: Saga Legends (Shadows of the Dark Side)!

Click "HERE" to go back to the home page. For more posts related to this one, please click the labels below.
Posted by The Toy Box on December 10, 2012
Email ThisBlogThis!Share to TwitterShare to FacebookShare to Pinterest
Labels: 2000's, Captain Caveman, Hanna-Barbera, Hong Kong Phooey, Joseph Barbera, McFarlane Toys, The Flintstones, Tom and Jerry, William Hanna, Yogi Bear