Looney Tunes toys have been a childhood staple ever since Bugs Bunny first walked on the screen and said, "What's Up, Doc," in 1940 (the character was created in April of 1938, but didn't make his official appearance until July 27, 1940). 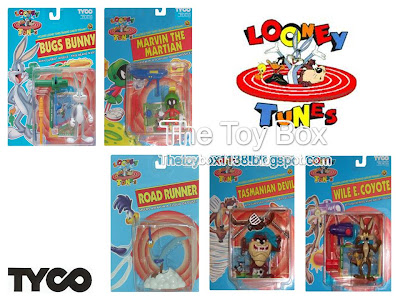 While you can find Looney Tunes merchandise of all kinds, action figure collectors have been a little more limited in options. While it's true that several variations of toys have been produced, most were simple one-shot figures, and not part of an actual series.

To find a series of figures, one can look to the 1994 series produced by Tyco toys. Small, hard to come by, yet relatively cheap, these five figures are fairly spot on renditions of their cartoon short counterparts - Though the accessories don't make all that much sense to the characters- such as Bugs Bunny's carrot launcher.

One of the best things to stand out from this series is the individuality of each package. Rather than just have a generic packaging for all the figures, each figure's package is specifically designed to coincide with the figure inside.

The series had great potential, but sadly never got the chance to thrive. Characters like Daffy Duck, Foghorn Leghorn, Porky Pig, Sylvester the Cat, and even more Looney Tunes characters than one could ever list would have made for an excellent second series and beyond. While it's disappointing that more figures weren't made, for Looney Tunes fans, this series is a must.

Join us next Monday for our look at Indie Spotlight: Comic Book Heroes!