When Mike Judge brought Beavis and Butthead to life on MTV in 1993, it was a pretty risky venture. Sure, shows had been getting a lot edgier those days. Long gone were the years of The Cosby Show, Family Ties, and The Facts of Life. In their place, The Simpsons, Married with Children, and now Beavis and Butthead. Was the world ready for two of the most idiot teens ever depicted in animation form?

It seemed so. The series was an overnight success, and soon Mr. Judge found himself at the helm of the show for five years, as well as having the opportunity to develop the full length feature film, Beavis and Butthead Do America. 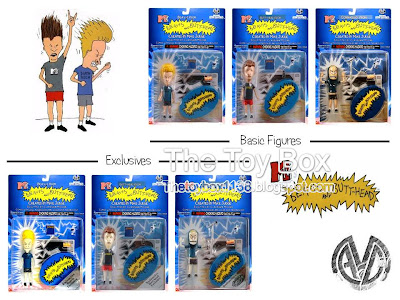 In 1999 Moore Action Collectibles produced a small line of figures. Sadly by this time the series was off the air, and people didn't seem eager to revisit it. The MTV generation had appeared to have grown up.

All three of the basic figures; Beavis, Butthead, and Cornholio were also produced in exclusive glow in the dark versions (known as "Radioactive" versions).

This is actually a series I would have liked to see grow into something much larger. There are so many iconic characters from the series that would have been wonderful to capture in plastic form. Perhaps with the series being revitalized, this opportunity is just around the corner.

Join us on May 1, 2012 for an announcement of a special all new month long event for the month of May, and on Monday the 4th for the first of many new posts that month! We won't spoil the surprise here.