When we set out to document Palisade's 2002 through 2005 series of Muppet toys, we first thought, "This is going to be easy. How many Muppet toys could there possibly be?" Well, the answer to that turned out to be, "A lot!" - Way more than we ever could have expected.

As stated above, the series launched in 2002 under the header, "The Muppet Show." The title lasted through three series of figures, which were a total of twelve figures.

Series two saw a variant figure of Floyd Pepper produced, making the figure available in his standard red jacket as seen in the show, as well as a blue (rarer) jacket. For series three, a variant figure of Zoot was produced with both an orange and brown jacket. 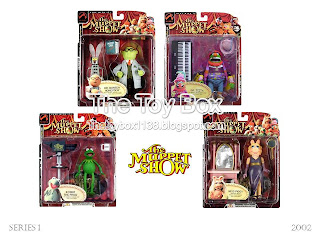 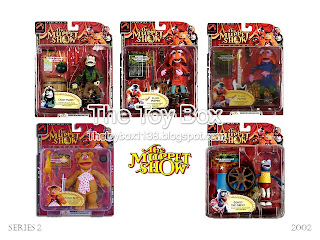 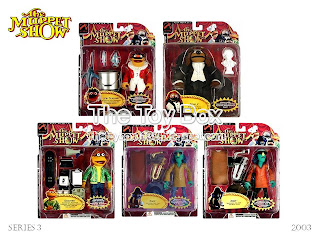 When series four launched on the tail end of series three in 2003, the package was redesigned, and the line was changed from "The Muppet Show" to just "The Muppets," or "Jim Henson's The Muppets," if you please.

This is where the series began to really blossom. Now the toys weren't limited to strictly being a part of "The Muppet Show" itself. Though, truth be told, this wouldn't necessarily have been a bad thing.

Now, the figures branched out to the various movies, which provided fans with a broader spectrum of figures, some of which were never seen in the physical show on PBS.

Variants also became a common staple in the series. 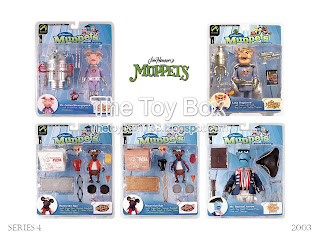 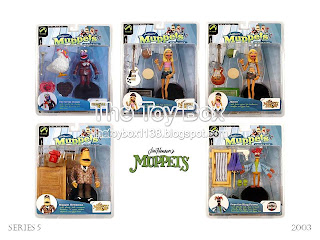 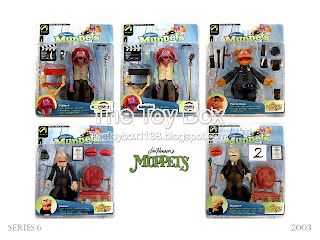 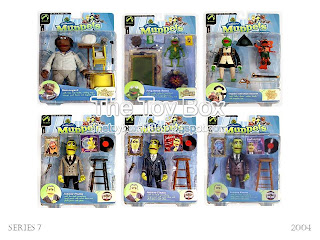 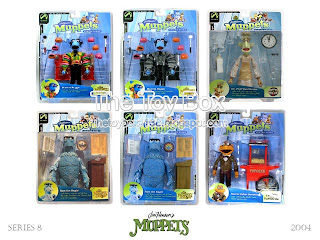 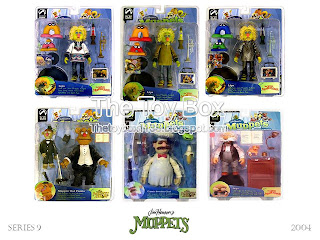 When figures suddenly disappeared from shelves in 2004 (after series 9), fans started to wonder what was going on. Series 10 through 12 had already been announced, and some mock up prototypes were even rumored to exist.

As speculation grew and grew, Palisade came forward with a very disappointing press release. After years of internal misappropriation of funds, and several shifty third party deals which left various groups unpaid, the company had filed for bankruptcy, and was closing their doors.

A handful of playsets were released over the course of the series. The largest, Backstage at the Muppet Show is an impressive two story set with incredible detail, and wonderful accessories. Each set also came packed with an exclusive (remolded) figure. 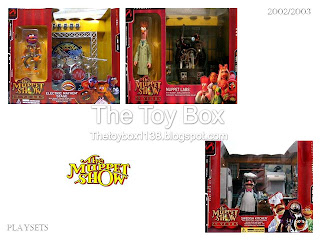 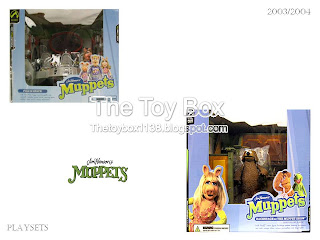 The Muppets had more exclusive figures than any one series ever should. They can be found in multiple packaging including bags, cards, and boxes. Palisade even went as far as to have exclusive give away toys (see below under final picture). 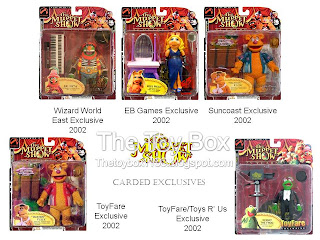 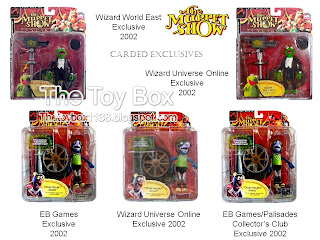 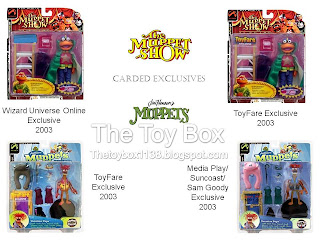 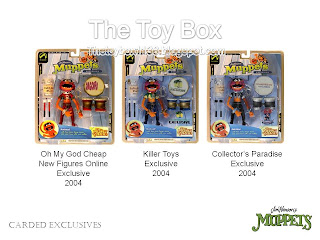 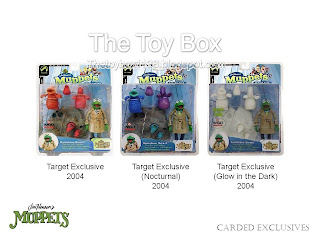 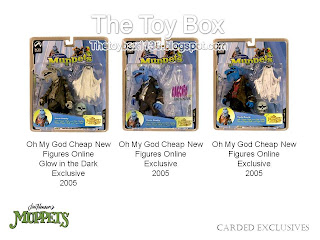 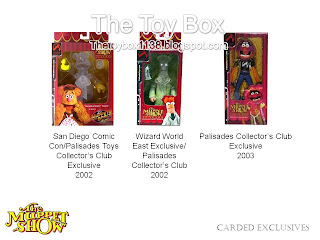 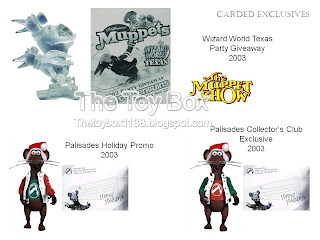 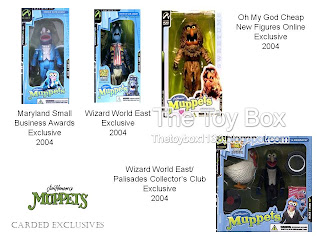 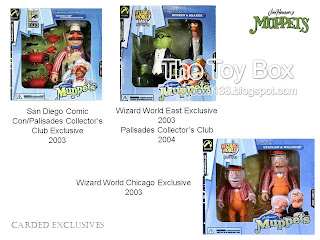 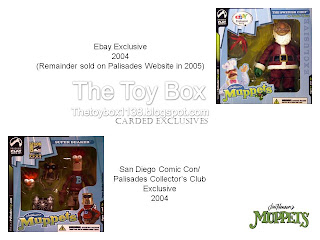 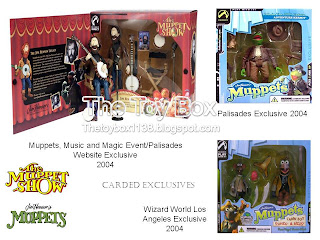 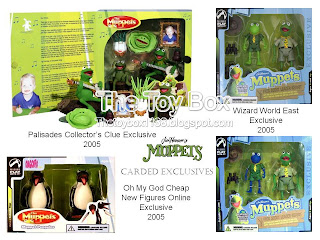 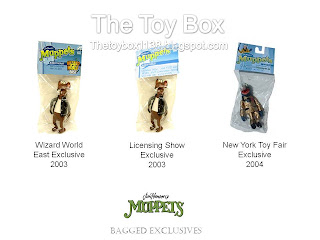 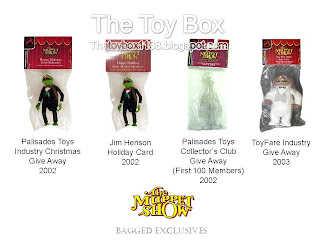 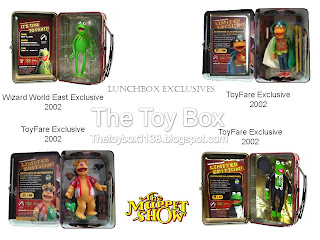 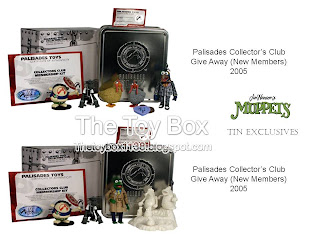 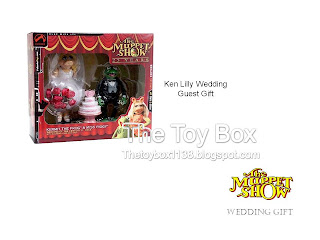 One of the first things you need to know prior to buying any Muppets figures is that you will most likely NEVER own them all.

As stated above, Palisade went as far as to give away exclusive figures. Most of which were designed as gifts for various industry exclusive events, and as staff gifts for companies such as ToyFare. This means that these figures were never made available to the general public, and also produced in minimal quantities.

The rarest is the Ken Lilly "Wedding of the Century" two pack. This set of figures (Kermit and Piggy in wedding garb) was produced strictly as gifts for Mr. Lilly's guests at his wedding. This piece alone can fetch as much as a grand on secondary markets IF you can even find it.

This aspect is an incredibly frustrating one to completests, and as a result, we personally will never bother with this series of toys.

It of course doesn't help that the secondary market is RIDICULOUSLY high. It's rare to find any of these figures for less than three digits a piece.

While there's no denying that this is an incredible set of toys, high in quality, and perfect in detail, the secondary market has priced them out of the grasp of the majority of casual collectors.

Join us next Monday for our look at Tyco's Looney Tunes!