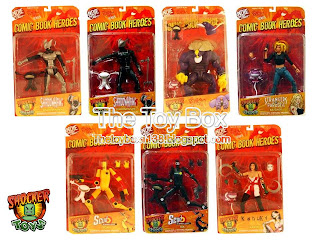 Indie Spotlight: Comic Book Heroes from Shocker Toys was an indie comic fans dream come true. The series offered the opportunity for smaller comic book series characters to be immortalized in plastic that didn't necessarily have the cast capacity to comprise of its own line. Because the figures were unrelated to each other, you also didn't feel obligated to collect characters you didn't necessarily want just to feel like your set was complete.

Series one had an amazing line up; Shadowhawk, The Maxx, Katchoo from Strangers in Paradise, our personal favorite, Scud The Disposable Assassin, and Kabuki. The series even offered two variants; a black Shadowhawk, and a black suited Scud.

The package design is interesting to say the least. It's a bit odd that every package would have The Maxx at the top of it. We're not sure how he's affiliated with all these various figures, because to our knowledge, he's not. 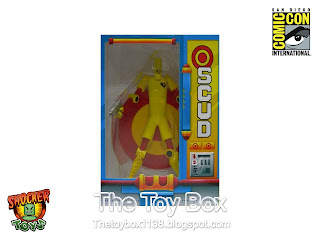 A Scud the Disposable Assassin packaged in his trademark vending machine was offered at San Diego Comic Con. The figure varied slightly in color from the originally carded version, and unlike the carded version, it was not packaged with an Isz. Not that we're sure why the original came with one, as the two characters are unrelated; they aren't from the same comic line, company, or creator.

What is frustrating to fans is that buyers of the entire first series were promised a mail away Mr. Gone figure if they purchased every figure, and mailed in the UPCS. To date, this figure has not been released. 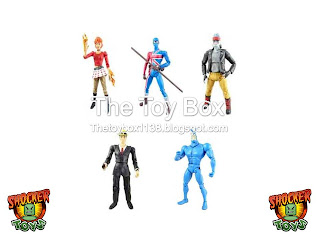 A second series of figures was scheduled to be produced, and even saw completion of the prototype phase for showcasing at Comic Con 2008. The figures were originally scheduled for a 2009 release, but then pushed back to 2010. As of this posting, those figures have still not seen the light of day. The series was slated to include; King Zombie, Dick Tracy, Ignacia, Jack Staff and The Tick, as well as a new mail away incentive figure.

Considering the second series was continuously delayed, it was interesting that Shocker Toys also announced a series three at Comic Con 2010. Series three has obviously never been released to date either. Nor has a list of the proposed figures that would have encompassed said series.

So, what's the deal?

As of March 8, 2012, Shocker Toys finally updated their website informing collectors that they were going through a transition, and, "Re-working their inner structure." However this is the first word from the company since their last update on December 10, 2011. 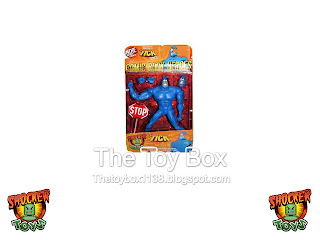 They're currently advertising on their site a "First Edition" of The Tick figure until the complete series 2 is released - For a whopping $35.00! The Maxx from series one is also advertised as being re-released for $35.00. Is this some form of attempt to get an influx of cash to keep the company afloat? Either way, one figure for $35.00 is what we like to call, "A rip off!"

They are also taking pre-orders for the Isz ten packs, which they are charging $24.00 for, and advertising a 60-90 day delivery window after order - which we feel is an excessive delivery time, and with the companies track record of delivering said products, it doesn't leave us with a warm and fuzzy feeling that they would ever arrive.

Finally, they are assuring buyers that if they still want the Mr. Gone mail away figure that they will honor original receipts in place of the UPC labels - though again, no release date is specified, and at this point who has their original receipt from a toy line they bought over five years ago?

All and all Shocker Toys has done very little to keep fans interested, and clearly offered no incentive for collector's to continue supporting the company. Their $35.00 price tag for one figure is quite frankly insulting, and the lack of updates in almost a four year period coupled with poor product support on top of it all tells the action figure community, "We don't care about you." If series two ever does see the light of day, we speculate it will be too little too late, and Shocker Toys will sooner than later be hanging an "Out of Business" sign on their door.

We're not sure what Shocker Toys issue is in not producing and releasing the second series, but a quick scan of their product list will show you that more than less of their products have been announced and cancelled, or simply not delivered. To us, that's not a company we want to support. The intentions of a good product means nothing if it’s continuously delayed and/or cancelled, and the company behind it simply can't seem to get their act together. What's really sad about this is that the first series that was actually produced is an incredible product.

If there are still fans out there waiting for series two to see the light of day, we sympathize with you. Especially the many out there who have taken to message boards claiming that Shocker Toys took their money for pre orders several years ago, and refuse to refund it despite failure to deliver said product.

However this is no surprise considering that in June of 2011, Geoff Beckett of Shocker Toys was served with court papers to secure creators' payment and rights over allegations of non payment to Shocker Toys creators. If the very creators of the toys can't get their money, what chances do the customers have of seeing a refund?

Jim Macquarrie who served the papers to Mr. Beckett took to his Facebook page later that evening, and is quoted as posting, "Got the pleasure of serving court papers on a guy who thinks paying his artists is optional. In the middle of his panel at Comic-Con. Kind of a jerk move, but he's kind of a jerk guy."

Join us next Monday when we take a look at The Adventures of Indiana Jones in Raiders of the Lost Ark!

Click "HERE" to go back to the home page. For more posts related to this one, please click the labels below.
Posted by The Toy Box on April 16, 2012
Email ThisBlogThis!Share to TwitterShare to FacebookShare to Pinterest
Labels: 2000's, Comic Book Toys, Image Comics, Kabuki, Scud the Disposable Assassin, Shadowhawk, Shocker Toys, Strangers in Paradise, The Maxx