In 1985 Mattel introduced the United States to Muscle figures, also known as, Millions of Unusual Small Creatures Lurking Everywhere. The little plastic toys soon took over many a parent's living rooms, and cluttered up bedrooms across the nation. The series origins can be traced to the Japanese comic book Kinnikuman which was based on intergalactic space wrestlers. Bandai also produced a line of figures based on the concept, but were sold strictly in Japan.

Mattel produced the American line from 1985 to 1986, at which point the series dwindled out, and production ceased. Unlike most toys, these particular figures were generally sold in random multipacks, which made it incredibly difficult to complete a set, and at the same time avoid getting duplicates. 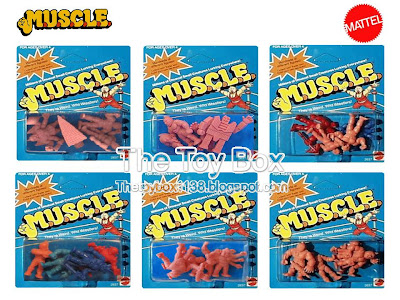 Above is an example of the various four packs one would see on the shelf at retail stores. The original figures were produced in only a pink color, but as the series progressed, several other colors were introduced. This in turn led to a whole lot of variant figures. Other colors known to exist are dark blue, light blue, red, magenta, orange, bright orange, purple, and green. Five figures were also produced in lavender, but these particular figures are exclusive to the Mega-Match Game (see below). 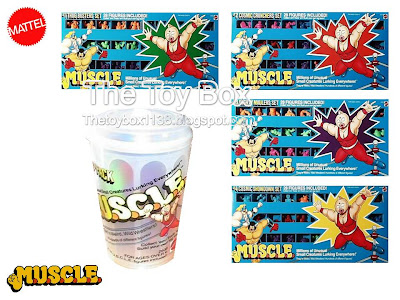 Shown above are the four 28 packs produced by Mattel (Thug Busters, Cosmic Crunchers, Mighty Maulers, and Cosmic Showdown). While this made getting figures a little easier, it didn't add up to all of them, so you were still left buying a variety pack if you wanted a complete set. As the series continued, these packs too became mix matched with various color variations.

The "garbage can" looking container is the random ten packs which Mattel also produced and sold across retail stores. Unlike the four packs which could be manipulated with a little shaking to see what was inside, it was impossible to tell which figures were in the cans until they were opened. The only thing that could really be told from looking at the package was what variety of colors lay inside. 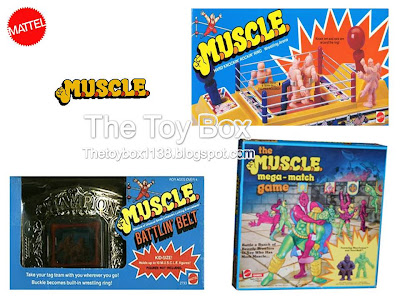 Only one playset (top right), the Hard Knockin' Rockin' Wrestling Arena was produced for the series. With it came two exclusive figures.

As mentioned above, five exclusive lavender figures were released with the Mega-Match Game (bottom right).

The last item shown (bottom left), the Battlin' Belt was more of a role playing item for kids to wear. 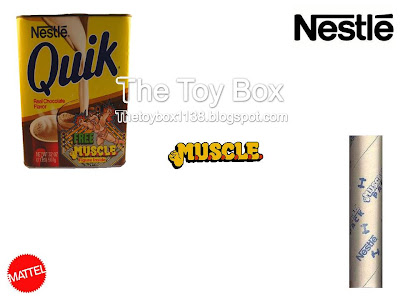 Mattel teamed up with Nestle to promote the series via their Nestle Chocolate Quik drink mix. Each specailly marked canister contained one figure in a clear plastic bag with a white cardboard backer inside. Various figures were available inside the canister, and all were prior released figures.

More elusive is the Nestle Tube (right). Much controversy surrounds this cardboard tube which contained ten random figures inside. Some claim it was given to them at school events, while others say it was a mail away item. No proof has been found to authenticate any of these claims, and only a handful of the tubes are known to exist today. 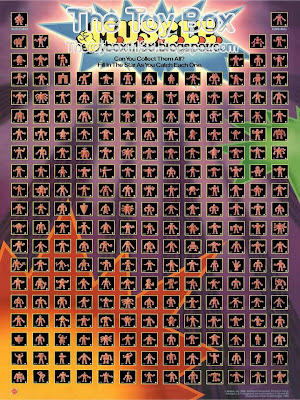 In the United States, there are 233 known Muscle figures, all of which are depicted on the above mail away poster, and all of which have a name (we're not going to list them all out here). However, as the figures began changing colors, this particular poster was changed, and while the figures remained the same, several color variations exist.

It is rumored that Mattel had planned on releasing all 400 of the Japanese Kinnikuman figures, and the "poster" shown on the back of the 28 packs (not shown)seems to validate this rumor - Though when the series died down, so went any plans to do so.

Back in the 80's, a pack of four Muscle figures would have set you back about a dollar. Today, you're lucky to find one for less than ten. Most sell for between twelve and thirty dollars depending on the color variations inside.

The ten and twenty-eight packs are next to impossible to find, and thus no determination in price can be given by us. Needless-to-say, the twenty-eight packs which sold for seven dollars in the 80's probably go for about ten times that.

The ring, belt and game are a little easier to track down, though most are not complete or mint in package. These particular pieces go anywhere from twenty-five to fifty dollars.

There is no denying that Mattel struck the iron while it was hot, and did it in the cheapest way possible - Little, single color plastic toys, which stood about an inch high, and were of the quality of vending machine toys at the grocery store. Hand over fist profits were raked in when Muscle toys hit the shelves.