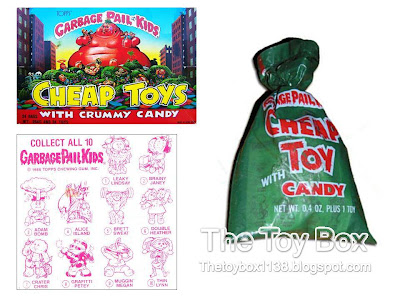 With the rapidly growing success of Garbage Pail Kids, Topps did something a little out of the ordinary for them. They began producing toys. Mind you, these weren't your average action figure with multiple points of articulation, or overly accessorized playsets. No, instead, Topps produced the Cheap Toys line.

Mini, one color figures sculpted to look like the characters resembled on the cards. Each packaged in their own mini garbage bag, with a checklist, and a small bag of Crummy Candy. All sealed with a simple twist tie. It was cheap, it was easy, and it brought in hand over fist cash from rabid GPK collectors around the world. 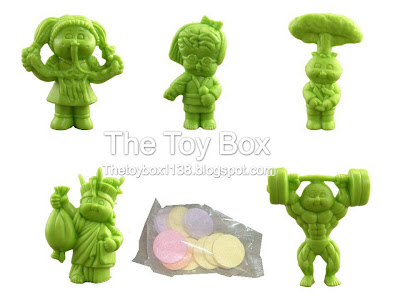 There were ten figures made for the series, which came in a variety of colors such as red, green, blue, yellow and peach. However to the true Cheap Toys collector, there are several more variations due to the drastic change in color/tone from dye changes at the factor with each produced batch. As a result, the cheap toys can come in;

And mind you, those are just the colors for the USA. Other color variations are known to exist in both the UK and Canada. 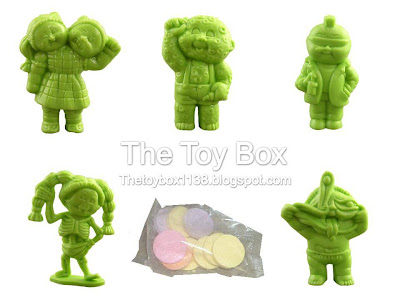 Today, these cheap toys (no pun intended) are worth a mint. One complete set of ten can set you back two to three hundred dollars. Especially if that set is strictly one color. The neon variations have sold for two to three times that - While the exclusive Canadian 2nd series goes for even more. Single mint in bag packs of figures can sell for as much as thirty to fifty dollars each, and complete boxes, while rare, can fetch as much as a grand. Not bad for tiny, two inch plastic molds.

Much like M.U.S.C.L.E. figures, what started out as a cheap way to produce toys has turned into a secondary market dealers dream come true. For as low quality as they are, collector's around the world can't seem to get enough of them, and as a result, supply and demand has made these a collectible relatively unobtainable to those on a strict budget.

Join us next Monday for our look at G.I. Joe: The Rise of Cobra!

Click "HERE" to go back to the home page. For more posts related to this one, please click the labels below.
Posted by OK Records 1138 on January 30, 2012
Email ThisBlogThis!Share to TwitterShare to FacebookShare to Pinterest
Labels: 1980's, Garbage Pail Kids, Topps