Well, it was inevitable. Michael Jackson only has two albums from the 80's. Three, if you include the Motown rogue Farewell My Summer Love. Because of that, it was only a matter of time before Thriller came around to the Retro Spins.

What is there to say? It's Michael Jackson's Thriller. If you don't like it, there's something wrong with your head. If you missed it, where the heck have you been? As of 2019, it was the number one rated best selling album of all time, having sold an estimated forty-seven million certified copies and an estimated sixty-five million copies in estimated sales. This thing is big!

So what's left to say? What more can I say that you possibly haven't heard already? Truthfully, nothing. 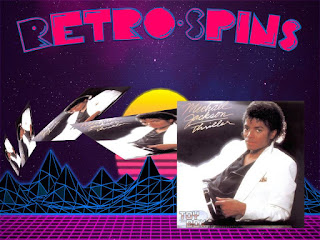 As such, I wanted to make this particular post special and not just a throw away. How did I do this? I listened to the album the way it was intended to be heard. On vinyl.

When you've listened to something on a hissing cassette or overly digitized CD for years, you honestly don't get the full experience. Things on cassette are drowned out by the hiss and things on CD's are so mashed together that you don't hear all the minute details of a track.

Hearing Thriller on vinyl was like hearing it for the first time. It was crystal clear, the music popped, and not because of the condition of the record, but the actual sound just jumped out from the speakers. Michael's voice was hitting all the right notes, transporting me back to an era where artists actually had to sing and not rely on a computer to fix their shortcomings. A day when artists had to perform and not just look unique - Which Michael accomplished in all aspects perfectly.

As I hear the album, The Girl Is Mine and The Lady In My Life still fall flat for me. Even after all these years. It's these two tracks, and has always been these two tracks, which prevent the album from being perfect. At least for me. It's also because of this that Bad will always be my absolute favorite, and considered perfect, Jackson album. Thriller falters under these two tracks.

I also have to admit, after four decades, Beat It, Billie Jean and Thriller, while iconic tracks, have been overplayed at this point in my life. I just don't want to hear them anymore. Don't get me wrong, they're great songs, but they had their moment in the spotlight. On the other hand, tracks such as Human Nature, Baby Be Mine and P.Y.T. (Pretty Young Thing) may never reach an overstayed welcome status with me. Perhaps it's because they didn't get as much air time as the aforementioned ones, or maybe, just maybe, they're far superior.

Whatever the case may be, there's no denying that Thriller was a monster success. It skyrocketed Michael's solo career into orbit and did so with tracks that were truly amazing, either for their time, or still today. For that decision, be your own judge. At the end of the day, the numbers don't lie. The album is the best selling of all time.

Click "HERE" to go back to the home page. For more posts related to this one, please click the labels below.
Posted by The Toy Box on January 24, 2023
Email ThisBlogThis!Share to TwitterShare to FacebookShare to Pinterest
Labels: 1982, 80's Album Review, 80's Music, 80's Music Review, Michael Jackson, Music of the 80's, Retro Spins, Thriller