New Jersey and Slippery When Wet were absolute monsters back in the 80's. However, what was the foundation in which these iconic albums were based? Where did it all start? That's what I wanted to find out in today's Retro Spin.

Bon Jovi debuted in the midst of 1984. Hair bands were big, new wave was big. Heck, it was the 80's. Everything was big. What else would you expect from the decade of excess? 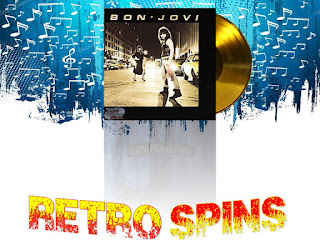 The album starts out with the only track I know from it, Runaway. It wasn't a song which garnered the success which would eventually come for the band, but it did manage to chart, and in due course, peak at number thirty-nine.

Track three, She Don't Know Me, was the only other song from the album to chart. However, it would only go to number fifty before disappearing. It's okay, but if I'm being honest, it wasn't as good as Roulette, the song which appears on the album prior to it.

Roulette is a powerhouse. It's got a crushing guitar riff and straight up rocks. It sounded almost out of a place for a Bon Jovi song with how powerful it felt.

It's interesting to see the band released a song called, Shot Through The Heart" on their first album. Ironic too, since it could be easily mistaken for their massive hit, You Give Love A Bad Name, from Slippery When Wet. Both songs are pretty great, in my opinion.

For debuts, it's no powerhouse, but it's decent. It was great to hear something "new" from a familiar band with a familiar sound. If I'm being honest, that's probably what made it okay in the long run. If nothing else, it points to the horizon for things to come.

Click "HERE" to go back to the home page. For more posts related to this one, please click the labels below.
Posted by The Toy Box on November 29, 2022
Email ThisBlogThis!Share to TwitterShare to FacebookShare to Pinterest
Labels: 1984, 80's Album Review, 80's Music, 80's Music Review, Bon Jovi, Music of the 80's, Retro Spins