Retro Spins: The Police - Ghost In The Machine

I feel like by 1983 The Police were just starting. What happened with that? Why did they suddenly break up?

Sadly, it all comes down to a common tale in the rock and roll world. One member, typically the singer, and as such in this case, got too big for their britches. As the story goes, Sting took control of the band, eventually making the remaining members, Andy Summers and Stewart Copeland, feel more like his employees than his band mates. Fighting ensued, and despite the band poised to be the next biggest thing in rock music, they finally called it quits in 1984 after a supporting tour for their 1983 album, Synchronicity.

Fortunately, before that happened, The Police left a mark in the music world which will forever be captured in vinyl, cassette and CD history. 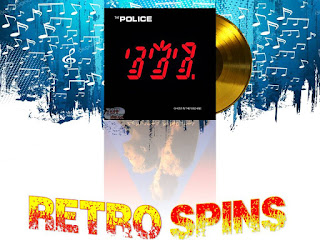 Today's Retro Spin takes me to their 1981 album, Ghost In The Machine. It all starts out with the powerhouse tracks, Spirits In The Material World and Every Little Thing She Does Is Magic. These two songs are definitely the most radio friendly of the eleven tracks which encompass the album.

The rest of Ghost In The Machine sounds very experimental with a heavy lean towards reggae. Mind you, this isn't necessarily a bad thing. It's just interesting, in light of this, how the band became a "pop" sensation, as this was clearly not their objective.

What throws me off the most about the album is how short each song feels. Just as you're getting into it, the tracks fade out abruptly and in seemingly awkward places. You'd really have to hear it yourself to understand what I mean by this.

The album also features singles, Invisible Sun, Demolition Man and Secret Journey. However, these aren't particularly good songs, in my opinion. Overall, that's kind of my opinion about the whole record. It's not terrible, but it doesn't blow me away, as I would have expected it to do for how big of a stink some people make about The Police. It won't stop me from eventually getting around to their remaining albums. I'm just not in any rush to do so.

Click "HERE" to go back to the home page. For more posts related to this one, please click the labels below.
Posted by The Toy Box on September 27, 2022
Email ThisBlogThis!Share to TwitterShare to FacebookShare to Pinterest
Labels: 1981, 80's Album Review, 80's Music, 80's Music Review, Ghost In The Machine, Music of the 80's, Retro Spins, The Police