Retro Spins: Cheech And Chong - Get Out Of My Room

As a kid in the 80's, Cheech and Chong were a gold mine of comedy. Though the duo had shifted from primarily releasing comedy albums for full length films, the era eventually got two. I've already talked about 1980's Let's Make A New Dope Deal, so today I'm rolling around to their 1985, and also final in their career, Get Out Of My Room. Coincidentally, it would also be their last film until 2013's Animated Movie.

While the album features some great comedic moments, it's overall shortfalls come in the form of too many songs, none of which are funny. 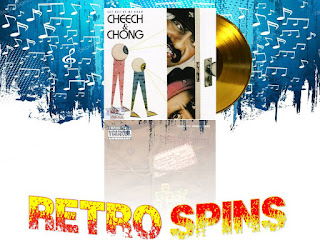 The first side of the record features Cheech and Chong playing a pair of dorm radio jockey's, thus equating to the heavy use of songs. Unfortunately, this side suffers the most from lackluster comedic bits, leaning on a reoccurring gag of Cheech's character having a speech impediment that results in him spitting on the mic consistently.

Blind Melon Chitlin makes a return as the opening character on side two, but unfortunately what starts out as a potentially funny skit inevitably results in yet another song. This is followed by what used to be my favorite track as a kid, The Music Lesson. This skit features a poorly British accented Cheech trying to teach a kid how to play. Sadly, the track doesn't appear to have stood the test of time. I didn't even remotely chuckle.

The remainder of the album is hosted by Stupid (Cheech) and Early (Chong), for the Stupid Early Show. Once again the skits fall flat and ultimately come back around to the characters from The Muisc Lesson who join the show and finally wraps up with a final song.

Overall, much like the film, it's probably the worst of the bunch. While as a kid it was fantastic, from an adult's perspective, it's clear the duo were on their last legs at this point. As such, it's no surprise they went their separate ways afterwards.

If you're interested in Cheech and Chong, definitely do yourself a favor and start, and perhaps stay, with the 70's material.

Click "HERE" to go back to the home page. For more posts related to this one, please click the labels below.
Posted by The Toy Box on September 20, 2022
Email ThisBlogThis!Share to TwitterShare to FacebookShare to Pinterest
Labels: 1985, 80's Album Review, 80's Music, 80's Music Review, Cheech and Chong, Get Out Of My Room, Music of the 80's, Retro Spins