Just when you thought it wouldn't get any more difficult to find the new G.I. Joe Classified series, Hasbro throws a curve ball. Both a run change and variant have been identified for the line, and hardcore collectors are on the hunt.

Before I get into this, let me be fair and give credit to sources where credit is due. These were reported by MCUcollector24 on his YouTube channel several weeks ago. The images below are also screen grabs from his actual videos. They're worth watching if you want to get in depth information on the figures.

First up is a run change to the first wave Destro. It appears that the first production run featured a circle sculpted into the top of its head, while later runs removed this "detail". It's worth noting that the upcoming Profit Director Destro figure will not include the circle on it. 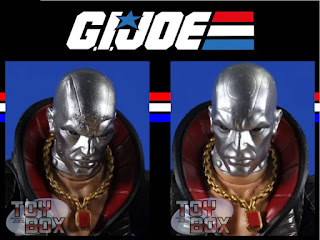 The variant figure comes from the elusive Target exclusive Cobra Island wave. Beach Head has been found to be released with both brown and blue eyes. However, it is unknown which version was produced first, or which is more rare. The reason being is that both versions have been reported as being in the same case.

In regards to this figure, the blue eyed version was the one shown in the production photos. However, fans of the original toy line and vintage cartoon series have been quick to point out that the character's eyes are indeed brown. 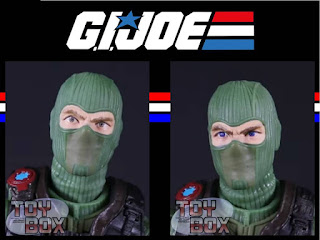 Oh boy, just what we needed, right? Difficult figures being made more difficult to find with run changes and variants. I'm sure several others will materialize as the line continues to chugs along.

Where do you stand on this? Are you a run change and / or variant hunter? Do you care which version you get? Do you prefer a specific one? The comments section is your place to keep the conversation going.

Click "HERE" to go back to the home page. For more posts related to this one, please click the labels below.
Posted by The Toy Box on September 03, 2020
Email ThisBlogThis!Share to TwitterShare to FacebookShare to Pinterest
Labels: G.I. Joe Classified, MCUcollector24, Run Changes, Variants