It's funny to see lip syncing is so common these days in music. Especially considering the events which unfolded on November 19, 1990. It was on this day, duo Milli Vanilli, were stripped of their Grammy for having been discovered they were nothing more than models lip syncing to another duo's vocals.

It all began in early 1988 when German producer and songwriter, Frank Farian, recorded a group album. During this phase, Farian found the artists to be unmarketable. It was because of this he turned his sights to Robert Pilatus and Fabrice Morvan, a pair of models who he hired to be the face of Milli Vanilli.

The end result was the debut album, "All or Nothing". While the album featured a shorter / alternate (or better stated, original) version of Baby Don't Forget My Number, it wouldn't be until the 1989 follow up album, Girl You Know It's True that the "band" would see its most lucrative year. 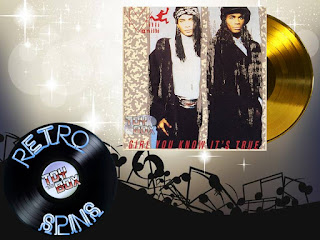 Milli Vanilli would go on to have five top ten hits in 1989, three of which went to number one; Girl You Know It's True (number 2), Baby Don't Forget My Number (number 1), Girl I'm Gonna Miss You (number 1), Blame It On the Rain (number 1) and All or Nothing (number 4). Of course with this came a lot of fame, fortune and attention on Pilatus and Morvan. Interviews, concerts and special appearances were a constant.

This all came to a head at a Club MTV live performance in Bristol, Connecticut where midway through "their" hit, Girl You Know It's True, the backing track began to skip repeatedly on the chorus. As the incident became a mass publicized event, the duo eventually fessed up to not being the true singers on any of the songs.

In the wake of the backlash, the original singers for the albums under the name The Real Milli Vanilli would step out of the shadows for their own attempt at success with the 1990 released The Moment of Truth. Unfortunately, due to the debacle that was the lip syncing scandal, the album wasn't released in the USA. Perhaps there was a genuine fear Americans wouldn't be forgiving for being scammed. I don't honestly know. Despite this, the album is notable for having three singles.

It's always fascinating how fate has a way of stepping in to bring lies to light. Just think. If it weren't for that backing track having one little hiccup we may have never known the truth about Milli Vanilli. Or maybe we would have. Maybe the duo would have eventually grown tired of the lie and come forward. Still, how many albums do you think they would have pulled off in the interim?

While it was a hot topic back in 1989 / 1990, these days I can honestly say I don't worry about it. I take the album for what it is. A group of great songs which have withstood the test of time. They're still as good today as they were in 1989. So with that perspective I kind of have to ask, who cares who the true singers were? Michael J. Fox isn't really Marty McFly, but I'd like to think he is. Mark Hamil isn't really Luke Skywalker, but I'd like to think he is. See where I'm going? Even though Pilatus and Fabrice weren't providing the vocals, they still became the characters of Milli Vanilli and with it we got a great album which otherwise would have been shelved as unmarketable.

Click "HERE" to go back to the home page. For more posts related to this one, please click the labels below.
Posted by The Toy Box on May 28, 2019
Email ThisBlogThis!Share to TwitterShare to FacebookShare to Pinterest
Labels: 1989, 80's Album Review, 80's Music, 80's Music Review, Girl You Know It's True, Milli Vanilli, Music of the 80's, Retro Spins