Since hearing Run DMC's Raising Hell, I've been a little more open to embracing 80's rap albums. I've grabbed up a few albums I'm going to be working my way through and the first one I selected to actually listen to was Fat Boys Crushin' from 1987.
I've honestly never heard a Fat Boy's album until doing so for this Retro Spin post. My only exposure to the trio is the 1987 film Disorderlies and quite honestly I couldn't tell you a thing about the movie other than they were always eating. What can I say, I was really young at the time. 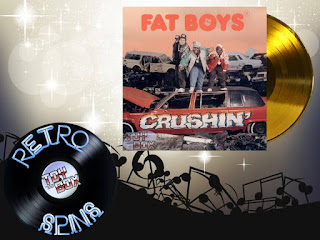 The album was not for me. The beat boxing was fun, but as a whole the songs just didn't hook me. Sure, I could say Wipeout was a decent cover of the Beach Boys hit, but in all truth, I won't be going out of my way to hear this song again. I found the short (ten to twelve second) tracks to be more entertaining than the actual music.

Just to be sure it wasn't just me, I went ahead and cross referenced the album to the charts and found that only one song actually managed to make a mark - Coincidentally, it was Wipeout. The song charted and made its way to number twelve between July and September.

I wish I could sit here and write more about this album, but I'd honestly just be wasting my time writing for the sake of writing and your time reading. I tried it, I didn't like it. Do I at least get credit for being open to trying something new?

Click "HERE" to go back to the home page. For more posts related to this one, please click the labels below.
Posted by The Toy Box on May 14, 2019
Email ThisBlogThis!Share to TwitterShare to FacebookShare to Pinterest
Labels: 1987, 80's Album Review, 80's Music, 80's Music Review, Crushin', Fat Boys, Music of the 80's, Retro Spins