"The Lovely Angels" - Kei and Yuri are the leading duo in The Dirty Pair. Though the characters were created by Haruka Takachiho, the figures we see today are based on the Dark Horse Comics versions which were adapted from Takachiho's work by Adam Warren when Dark Horse acquired the rights to release comics in the USA based on the characters. Since then, the Pair have been featured in numerous US released mini series, one shots and shorts. 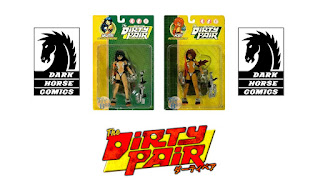 Despite being a limited run of figures, Dark Horse's plastic renditions don't skimp when it comes to the detail, articulation, and in general the great design of everything form the package to the toy. These figures are fairly spot on to their inked versions, and each figure features eleven or more points of articulation.

In addition to the figures, Dark Horse released a few more items based on the characters. One such item was the below ten inch statue. Though we're not big fans of inarticulate "toys", we can definitely see the draw that this particular item would have to fans of the series. It's a pretty cool piece of "art". 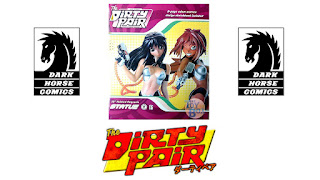 As we mentioned, Dark Horse also produced other items based on Kei and Yuri; a pair of shot glasses, and a pair of t-shirts. These items were all advertised on the back of the carded figure packaging - In addition to a handful of graphic novels featuring the two.

Much like a lot of obscure toy lines we've talked about here in the past, The Dirty Pair figures and statue don't sell for too much these days on secondary markets. However, this may be because most sellers are asking far more than people are willing to pay. At $30.00 per figure (mint on card), most buyers with any interest are passing. On occasion a figure will sell for about $20.00, but this is definitely not often. However, the typical price buyers seem willing to pay for these are $8.00 to $10.00.

The statue seems to fair a little better - Though it is definitely rarer than the figures. We've seen sealed ones priced around $80.00 (with no buyers), and opened ones sell for around $20.00.

Click "HERE" to go back to the home page. For more posts related to this one, please click the labels below.
Posted by The Toy Box on November 20, 2017
Email ThisBlogThis!Share to TwitterShare to FacebookShare to Pinterest
Labels: 2000's, Comic Book Toys, Dark Horse Comics, The Dirty Pair