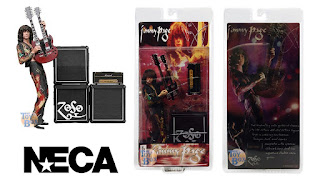 Today we're going to talk about a figure based on a little known guitarist. You may have heard of him - Jimmy Page. He was the strings behind such great bands such as The Yardbirds, The Firm and Led Zeppelin. Of course if we had to explain any of that to you, then you probably have no clue who Jimmy Page is in general. Most people, even those who aren't fans of his work, still know the name.

The figure which NECA showcased page in his infamous Black Dragon suit, hoisting up a double neck guitar. The figure also includes a set of amps with Page's nonsensical "Zoso" symbol - Which to date the guitarist has never said what it means to him.

Editor's Note: Zoso was originally used as a magickal sigil by Cardano to represent Saturn. He first used this in 1557, and the version used by Page is slightly altered from the original design. As such, Page's Zoso is considered by many to be an adapted occult sign.

The figure essentially is what it is - Jimmy Page memorialized in plastic form ala NECA. As we've said before regarding toys such as this, there is a strict niche audience looking for these.

Unfortunately, said niche audience is going to pay quite a bit for it if they want to obtain one these days. The figure can sell for anywhere from $70.00 to $140.00 mint in the package. We're not sure why there is such a large margin of price point between high and low values as the figure isn't too uncommon by any means. We've even seen one sell for $200.00.

Whatever it is that keeps fans paying prices all over the map, there is one thing for sure - Get yours while you can if it's a figure you're interested in.

Click "HERE" to go back to the home page. For more posts related to this one, please click the labels below.
Posted by The Toy Box on November 13, 2017
Email ThisBlogThis!Share to TwitterShare to FacebookShare to Pinterest
Labels: 2000's, Coverdale Page, Jimmy Page, Led Zeppelin, Page and Plant, The Firm, The Yardbirds