They're poorly written, they've got the worst "actors" and "actresses" the studio could find, and they're some of the best of the worst films to sit through with your friends. Yes, you haven't had bad TV night until you've had a night of Troma! Featuring such classics as The Class of Nuke 'Em High, Sgt. Kabukiman N.Y.P.D., Cannibal! The Musical, Surf Nazis Must Die, and of course, The Toxic Avenger. Mind you, that list doesn't even scratch the surface of the awful, awful films this studio produced - Awful in a good way. 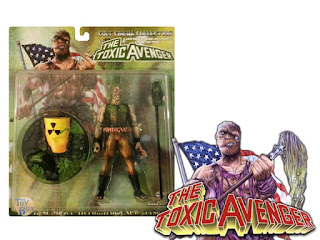 Out of the Troma library, The Toxic Avenger was the only character to really expand into mass media with the very short lived The Toxic Crusader cartoon which ran for thirteen episodes and spawned its own toy line. However, we're not looking at that particular series today. Nope, today we're looking at the one and done The Toxic Avenger from Reds, Inc. which was produced in 1999.

This figure had it all...If you were a fan of Toxie. The sculpt was meticulous to that of the character, and even featured his trusty mop as an accessory. Even the base that came packed in wasn't shy of detail featuring a toxic waste spill complete with drum. For such an unheard of company, this toy was quite frankly one of the best for its time. 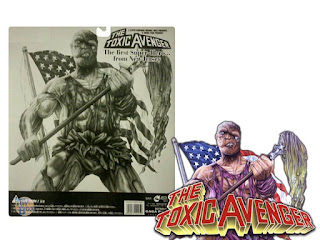 The unfortunate side to this figure is that if you're looking for one today - Good luck. They're few and far between, and they're not cheap. You can expect to spend upwards of eighty dollars if you can track one down. That's a lot of cash for....Well, quite frankly anything Troma related. We dare say the figure costs more than Troma's average film budget - Kidding of course!

Click "HERE" to go back to the home page. For more posts related to this one, please click the labels below.
Posted by The Toy Box on October 24, 2016
Email ThisBlogThis!Share to TwitterShare to FacebookShare to Pinterest
Labels: 1990's, Reds Inc, The Toxic Avenger, Troma