"It never hurts to help." It was the catch phrase of Eek the Cat that often times would lead to trouble, and the premise of each episode. The show often times featured slapstick humor, and pop culture references making it popular with many fans of 80's television and movies.

The series ran for five seasons, encompassing seventy-five episodes from 1992 to 1997. What made it stand out the most among cartoons of the period was that several seasoned actors were drawn to it to loan their voices to various characters. Actors and Actresses such as William Shatner, David Duchovny, Gillian Anderson. "Weird Al" Yankovic, Tim Curry, Dee Snider, Phil Hartman and Mr T. were just a handful of the popular names to appear on the show. 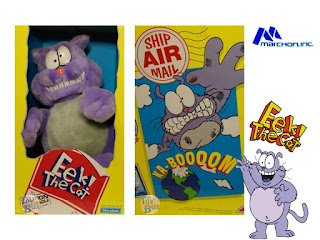 In 1992, one of the very few Eek! the Cat toys was produced and released by Marchon, Inc. The plush stands approximately fourteen inches high, but unfortunately doesn't contain any features such as a pull string voice activation or...Well, anything. It's just a plush doll.

That's not to say it's a bad plush. It's certainly Eek! the Cat - Right down to his purple fur. Considering there weren't exactly a ton of Eek! toys, it's kind of one of those take what you can get things.

You can find a few of them here and there on secondary markets, but what you're not going to do is get it for too cheap. Opened plush dolls can set you back as much as $60.00 to $70.00. Plush Eeks still in the box will set you back about twice that amount.

Click "HERE" to go back to the home page. For more posts related to this one, please click the labels below.
Posted by The Toy Box on October 10, 2016
Email ThisBlogThis!Share to TwitterShare to FacebookShare to Pinterest
Labels: 1990's, Eek the Cat, Marchon Inc