If you remember our post on The Legend of the Lone Ranger, you may remember that we mentioned this series. 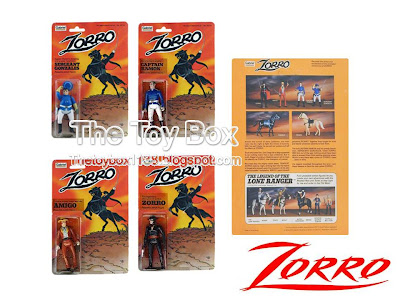 Also part of the Filmation cartoon The Adventure Hour, the Zorro figures shared a common design to the previously mentioned Lone Ranger toys.

The bright orange packaging depicted the character bucking on his horse with his sword raised. A common depiction from the cartoon itself right as the hero would ride off.

The back of the card, which showcased the entire series of toy’s shared the spotlight with The Legend of the Lone Ranger figures (displayed at the bottom). 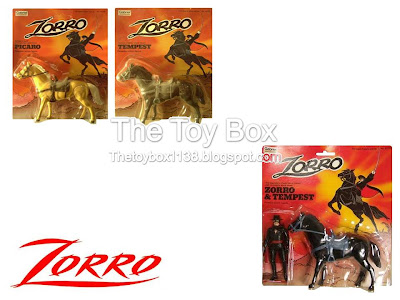 Two horses were also produced along with the four figures which were released. Prior to the series being cancelled, a two pack of Zorro and his horse Tempest were released. This particular two pack remains the rarest item in the series.

Most dealers on the secondary market ask between fifty and sixty five dollars for each mint on card piece, though they rarely sell at these prices. Rather, it appears that most collector's are only willing to pay between fifteen and twenty-five per piece. As a result, most secondary market products remain unsold.

Join us next Monday for our look at Corpse Bride!