The Legend Of The Lone Ranger (Gabriel Toys)

The Lone Ranger has been around since 1933 where the character was first introduced on public radio as a serial. The series was such a huge success that the character was quickly adapted into film, television, comic, and full story books. 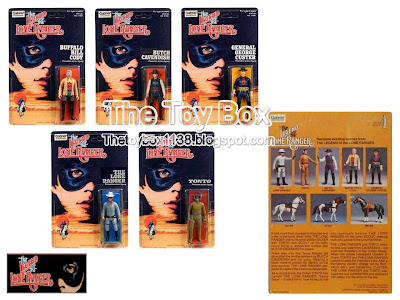 In 1982, Gabriel Toys produced a small line of figures based off the iconic hero of the West. The figures were based off the Filmation cartoon The Adventure Hour which depicted The Lone Ranger, Tarzan, and Zorro. Unlike most cartoons of the 80's, this series took a page straight out of historic context to produce a much more mature show for its time, while at the same time following the standard Filmation theme of having moral lessons for each show.

The five figures produced for the series were depicted on black cards with The Lone Ranger's face, while at the bottom it depicted him riding off into the sunset. The back of the card showed the five figures available as well as the three horses (Seen below). 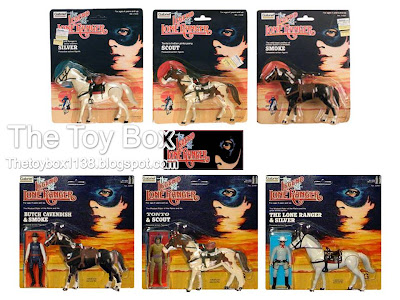 While the card backs for the single packed horses were the same as the figures, the ones for the two packs were split in half. On the top half were the Lone Ranger toys, with the bottom half showing the Zorro figures (card back not shown). Some collector's don't fell these pieces to be a part of the series, but rather their own separate series. 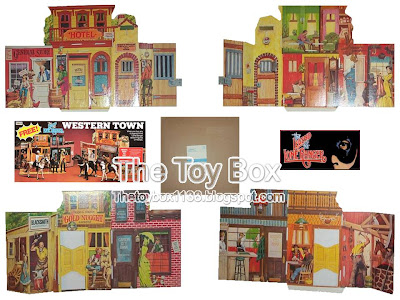 A free mail away playset, "Western Town" was produced for the series. It was nothing more than two, two-sided cardboard cutouts. It was mailed to recipients in flat brown mailer envelopes which also contained a two sided instruction sheet for putting it together. Another sheet of cardboard cutouts was also included which depicted the wood plank flooring, as well as "accessories".

The series never saw the popularity as other Filmation shows, but to date remains a great series for collectors.

It's difficult to find these figures at a reasonable price. The majority of second hand dealers are asking between sixty and seventy-five dollars for each figure, which as a result leaves them unsold. Full sets of the series (without the two packs) have sold for a more reasonable price of between three to four hundred dollars (mint on card).

Posted by OK Records 1138 on February 20, 2012
Email ThisBlogThis!Share to TwitterShare to FacebookShare to Pinterest
Labels: 1980's, Gabriel Toys, Lone Ranger, The Legend of the Lone Ranger